Life and Death. Lent and Easter.

On November 11th I took a pregnancy test.

Walking into our bedroom while it was still dark, flicking on the lamp, and showing Alex that positive pregnancy test - the day after his dad died - was a little less than God parting the clouds and bending down to look us straight in the eyes and say, "yes there is death, but it's not the end. I also bring life."

We were not "trying" for this baby. Not like with the other two, where we tried for months in one case and years in the other. But we are open to life, and that means you accept it when it comes, whether it's a good time or not. By worldly standards this was not a great time to be having another baby. We already have two young kids who still have all the needs of young kids, plus the unique needs of a kid with hearing loss and other chronic health problems. Alex was still in school, about to graduate with the student dept he had amassed over the last couple of years, and as of that time no job lined up to pay it off.

But in one very important way it was the perfect time for a new baby.

I believe it is no coincidence that while we were grieving the first big family loss that either of us had experienced, we got our first surprise baby. It was as though I were hearing it for the first time - God alone is the author of life and death. Sometimes we're able to trick ourselves into thinking we're in control, but really, none of this is up to us. And when it seems like we are surrounded by death, He gives signs of life, a small foretaste of the Everlasting Life that He offers us. 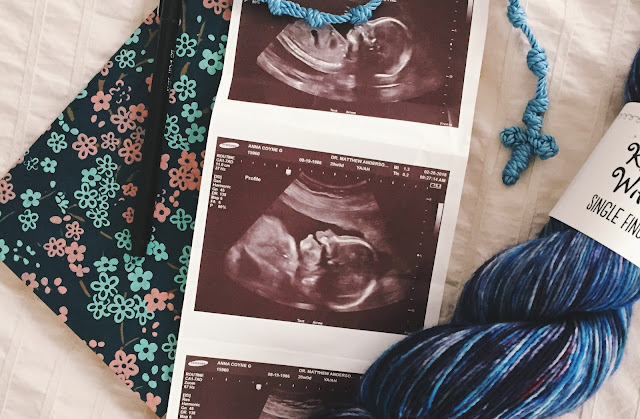 It's now four months later. We are in the middle of Lent. I normally love the season of Lent, but not this year. I've had enough of sorrows. It's cold, it's dark, my body is in varying but constant levels of pain from carrying this child. Extreme exhaustion, the unrelenting demands of parenting and work, and a winter that never seems to end leave me feeling a little bit dead inside. I look out my window and see the decay of last year's garden poking out from under the snow in my backyard. I long for signs of life.

Then I feel the kick against my ribs. I see a patch of grass where the snow is slowly receding. I look at my calendar and see that Easter is only two weeks away.

Signs of life. Reminders that He is as faithful as the changing of seasons.

Spring after winter. Easter after Lent. Life after death.
Posted by Anna at 1:47 PM

Email ThisBlogThis!Share to TwitterShare to FacebookShare to Pinterest
Labels: seasons