How We Met Pt. 2: Misnomers

If you haven't read part one, you may want to get caught up. 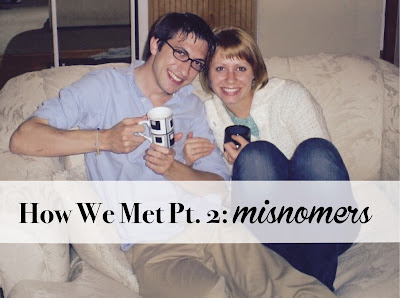 At the start of each shift at the bakery I would head to the back of the store to stow my purse and don an apron. I'd scan the schedule to see who else I was working with that day, and inevitably my eyes would float to the top of the list where Alex's name was, hoping we might be scheduled at the same time.

It took only a few shifts working together to make me realize that I liked Alex. After that it was only a matter of getting to know him well enough to decide if I actually wanted to date him. I knew he was kind and funny and easy to talk to. I knew we had many shared interests, music, movies, travel. I knew he liked to cook and eat interesting foods. And I also knew that he was a Catholic.

It was this last fact that gave me pause. Unfortunately, in my Evangelical upbringing, Catholics were given a bad rep. "They only pray to Mary, and they don't read the Bible. They don't even know who Jesus is, they just follow a bunch of rules."And as far as I could tell, that was more or less true.

But I wasn't so judgmental as to think that no Catholics could be "actual" Christians too. Alex seemed like a decent guy. He didn't swear or use vulgar language, he was respectful to all our customers and coworkers. I thought there was a good chance he was "for real", but I had to find out. And believing that sometimes it's best to be direct, I asked him point blank.

Me: So you're Catholic right?

Me: So, what do you think about Jesus?

I was satisfied. If he asked me, I would go out with him. And I told my sister as much. She worked at the bakery too, and got scheduled with Alex more than I did. "If Alex ever asks you if you think he should ask me out, say yes." Because being a 20 year old who'd never dated, I thought that's how things went.

But that wasn't how it went. We spent half the summer flirting with each other a couple times a week at the bakery before we managed to hang out with a group of coworkers outside of work. On the second of these group hangs, Alex and I were walking to our cars together at the end of the night, and he turned to me and said:

No, that was not a typo.Yes, he called me Amy, which is the name of my little sister, who also worked at the bakery with us. In Alex's defense, I was called Amy by my mother nearly everyday since she was born, and I'm still called Amy by many of my relatives at family gatherings. We're sisters, we look a lot a like, and our names both start with A. It's bound to happen. But it was pretty awkward that he called me Amy in that particular moment. I think I handled it well. I said:

"Yes, but you just called me Amy."

He assured me that he was intending to ask me out and not my sister. And I assured him that it really was not a big deal. We fixed a day and time, and I drove home, probably without seeing any of the road.

Email ThisBlogThis!Share to TwitterShare to FacebookShare to Pinterest
Labels: blogging, how we met