Lately I've been tired. Not just sleep deprived, but a burned-out kind of tired. I feel like I'm doing the same things day after day. Cleaning up the same messes, cooking the same meals, getting up with the baby at the same times during the night, giving the toddler the same instructions over and over again. Sometimes it feels like a thankless job with no visible results. Sometimes I get discouraged, and I get tired, and I get worn out. When I stop and think about it, I know that what I'm doing is important, I really do. But sometimes I just with I could see some fruit for all of my labor.


While the crowd was pressing in on Jesus and listening to the word of God,
he was standing by the Lake of Gennesaret.
He saw two boats there alongside the lake;
the fishermen had disembarked and were washing their nets.
Getting into one of the boats, the one belonging to Simon,
he asked him to put out a short distance from the shore.
Then he sat down and taught the crowds from the boat.
After he had finished speaking, he said to Simon,
“Put out into deep water and lower your nets for a catch.”
Simon said in reply,
“Master, we have worked hard all night and have caught nothing,
but at your command I will lower the nets.” (Luke 5:1-5)

I know I've read these verses before, but this time the words are jumping off the page at me. I understand exactly how Simon Peter felt. He was tired and discouraged, he'd been up all night long, he'd just finishing cleaning those nets for crying out loud! And Jesus wants him to go out there again?

Clearly Peter's obedience was rewarded, and Christ revealed His divinity through it. But there's another reason this story stands out to me as so amazing; it's because I know how it ends. I know what Simon Peter goes on to do- cast out demons, heal the lame, stand in the empty tomb, hear the rushing wind of the Spirit and speak in tongues at Pentecost. And it blows my mind to think that when Jesus found him he was tired and discouraged from being up all night- just like me.

Just when I think I've finished my work, when I've gotten both kids down, and the kitchen is cleaned up, and the laundry pile is taken care of, when I've made my cup of tea and am about to settle into a comfy spot on the couch with my book, (who am I kidding? with my Netflix) invariably someone wakes up to be fed, or to be tucked in again. I exhale with a sigh of exasperation, can't I just catch a break? But I should pay attention, because Jesus is passing by, and He is calling me into the deep water of my vocation.

There's an abundance in my life whether I like it or not.  Every day an abundance of opportunities to show love to my family.  And not just the kind of love that looks good on Instagram. Service, love in action. The kind of love that gives of itself and lays down its life. It's hard to love like that. But there's also an abundance of grace that helps me to love, imperfect and selfish though I be. Maybe right now I can't see the fruit of my love in action, the catch that is sinking my boat, but I have to believe it's being made, and stored up in eternity.

For the time being I am in deep water, and it's right where Jesus has called me to be. It's not easy, but there is so much more here than if I had just stayed on the shore. 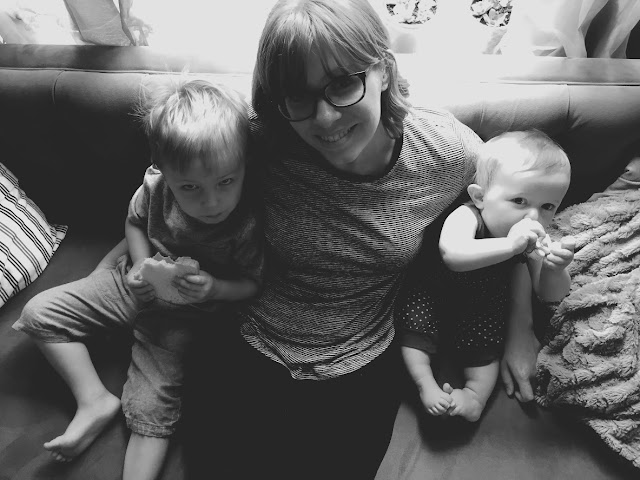 Email ThisBlogThis!Share to TwitterShare to FacebookShare to Pinterest
Labels: encouragement for mothers, motherhood and faith, vocation, vocation of motherhood