But I will never forget the date of Johnny's baptism. June 1, two days after he was born.

We were brand new parents, and to turn our world even more upside down we had just found out our son had a very serious birth defect and would be having his first of many surgeries within a day or two.

My husband and I remember the day our newborn son was transferred to the NICU as the darkest of our life. We had no idea what was going on, struggling to keep up with medical jargon we didn't understand, feeling like life had come to a complete stop, and that it would never be normal again. We were sharing the little tiny pull-out couch in Johnny's NICU room. I was hobbling around on the unsteady legs and in the weirdly shaped body of a newly postpartum women, recovering from a very private event in a very public and uncomfortable setting. We took turns holding Johnny's hand through the window of his incubator. I couldn't stop crying.

We decided that we wanted to have Johnny baptized before he went into surgery. The procedure was not incredibly risky, and his prognosis was very good, but we wanted to have him baptized all the same. We called our priest, who quickly came down to the hospital. My parents were there, as well as our good friends who we had asked to be Johnny's godparents. The nurses kindly overlooked the 4 person maximum of the NICU rooms for us. Johnny was placed on a pillow on my lap, his IV tubes and monitoring cables carefully arranged, and the rite began. 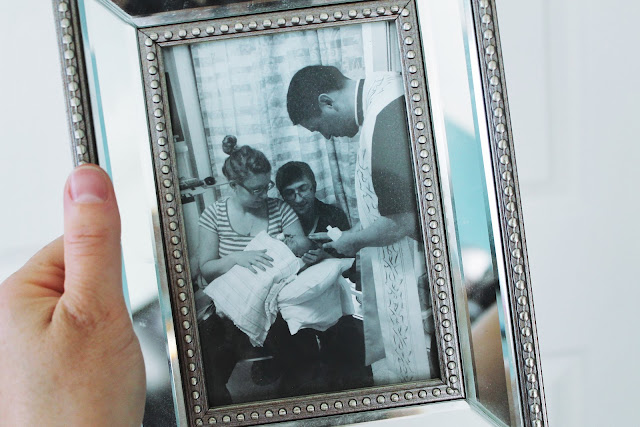 There, in that NICU room, in our darkest hour, we invited the light of faith. Hoping for what we could not see – forgiveness of sin, adoption into God's family, grace – drops of water were sprinkled on Johnny's forehead. We buried the fear and sadness that had consumed the last 24 hours with Christ in the water, and we allowed hope and joy to rise. Johnny was the one receiving new life, but we were being renewed as well.

The next day Johnny went into surgery. We still felt anxiety, and we still cried, but something was different. A sacrament had taken place, the invisible had been made visible and tangible. We were united with Christ, even there in our darkest hour.  Or maybe, especially there, in our darkest hour.

Tonight at dinner we will celebrate Johnny's baptism. Trixie will lend Johnny the baptism candle she received when she was baptized in our church. We'll light it and receive the light of Christ again. Since beginning this post I have looked up the date of Trixie's baptism, November 14. So we'll be sure to light the candle again on that day as well.