So This Happened Today..... 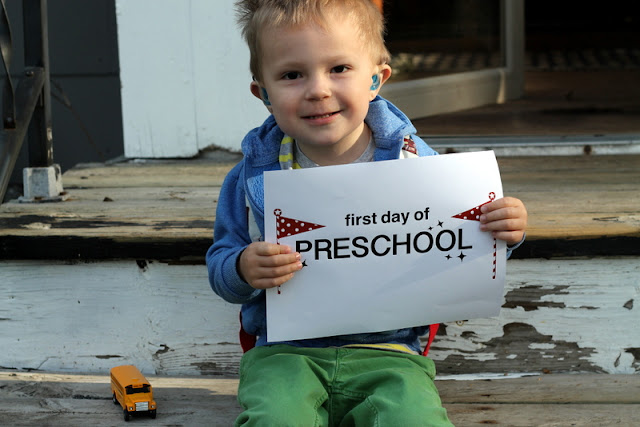 Johnny had his first day of school, much sooner than we originally thought he would.

We've gone through a lot with Johnny's hearing this past year. First his speech was regressing, then we found out he had fluid in his ears and wasn't hearing anything.  Then he got tubes in his ears, and he started seeing a phenomenal new speech therapist.

About a month after that Johnny had his hearing re-tested with a sedated ABR test. We learned that his hearing has gotten worse.  It's hard to describe how much worse, since it's certain frequencies he can't hear, and it's different in each ear. But categorically he went from having a mild/moderate hearing loss to a moderate/severe hearing loss. Of course the first question we had was, will his hearing continue to get worse? There's really no way to know, and we will just keep monitoring it. At this point his hearing aids are still able to compensate for his hearing loss. Theoretically he's hearing normally with his hearing aids. But if his hearing does get worse hearing aids may not be able to make up all of the difference and then he would be a candidate for cochlear implants.

The results of the hearing test made me sad for my boy, and anxious about his future. I know as a parent you can't protect your child from everything. Not everything in our children's lives can be, or should be easy. It's good to struggle and face adversity because that is how you grow and develop resiliency and character. But Johnny has already been through so much. He already has to work harder than most kids his age. I know there will be hard things in his life, I just really don't want expressing himself and communicating with others to be some of those hard things.

Two days after we got the new diagnosis for Johnny's hearing loss we visited a oral pre-school for deaf and hard of hearing children. And it was amazing. A few kids had hearing aids, but the majority had cochlear implants (so that means they are completely deaf) and they were talking like there was no hearing loss whatsoever. They were talking like they weren't limited by their hearing loss, and that's what we want for Johnny. 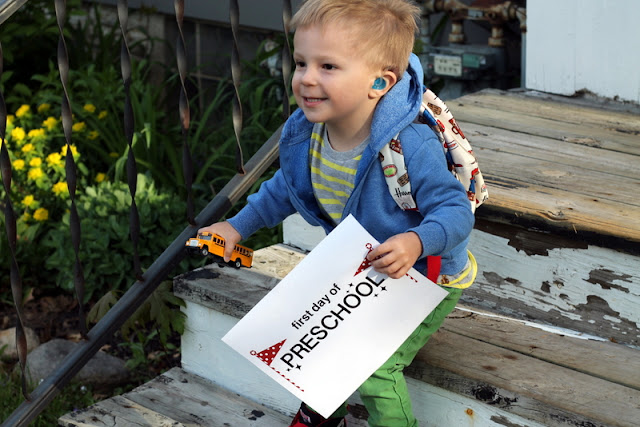 So we started the enrollment process, applied for financial aid, and waited for the school to let us know when he could start. I knew it was coming, but when we got the email with his start date I still got kind of sad. He's only going three days a week, and it's only for half days, but he's my first baby and he's never been away from me.

Even though he drives me a little bit crazy most days, I'm not quite ready to have him away. I like our time at home, the freedom to stay in our jammies all day, or go see friends whenever we want. It dawned on me this morning that, for the most part, that phase of motherhood is over for me. Starting now I will have kids in school for, oh I don't know, the next 20 years! Or more! I will be in my 50's when I'm done having kids in school! I kind of don't want to go there right now.

Right now there is just this first day. Our first morning scramble, our first time getting his backpack ready, our first time walking him into his class room. I cried a little as I watched him settle in with all the cool toys. Then he cried a little when we said goodbye to him. The teachers assured us that it will get easier and he'll love it in no time. I know they're right, but I was still so relieved when one of the speech therapists texted me a picture of Johnny playing with some trains. And even more relieved when he was back home and I could say, we made it.

Right now we will adjust to our new routine of  doing this three days a week. And I will cherish those two days a week I'm not taking Johnny to school, when we can stay home in our jammies and snuggle. Yes, right now there will be lots of snuggles. 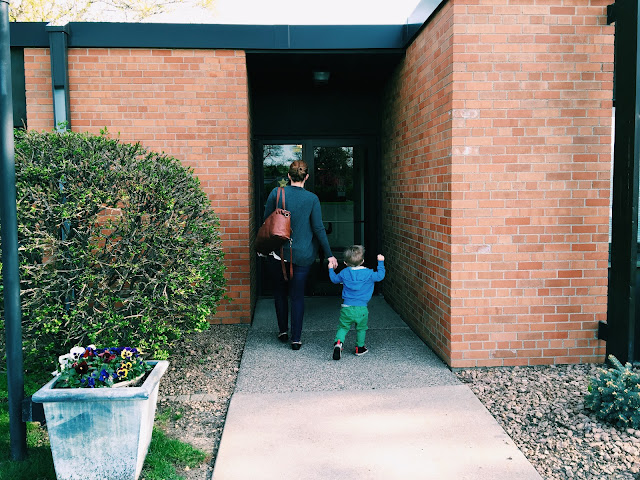