The Tale of Johnnys Ear Tubes. Or: I'm Still Learning How to be a Parent

We were thrown into some intense parenting when Johnny was born almost three years ago. The learning curve was steep and we had to run to keep up. Parenting Johnny required knowledge of things I never could have imagined I would need as a parent, like how to change a colostomy bag, or how to nurse a baby without pulling out his hearing aids, and what a left superior vena cava is. I remember feeling so overwhelmed by the information being hurled at me, like parenting would never be normal, or easy. (Little did I know, parenting is always crazy, no matter your circumstances). But the Lord was requiring of me something different than what I had imagined, and I had no choice but to rise up and face it full on.

And you know what? I survived! We all did.

Facebook recently reminded me that Johnny had his (hopefully) last GI surgery two years ago. It seemed like we would never be done with that colostomy bag, but now it's a distant memory. Then things settled down for us quite a bit.  Johnny started speech therapy, and we've had to deal with some pretty bad diaper rash.  But aside from that, parenting has been pretty "normal" these last 2 years.

I liked that things were going well and we didn't have to worry about anything, and that life was going the way I expected it to. So when Johnny stopped hearing this fall I think I didn't want to admit it.

It's easy to blame things on toddler-hood.

He's not responding to us because he's a toddler.

He throws a lot of tantrums because he's a toddler.

What was really going on though was that fluid was collecting behind his ear drums and not draining, taking his hearing loss from mild-moderate to profoundly deaf. He hasn't been hearing us. And the thing that kills me is that we have no idea how long it's been going on. We do know that in September his ear drums were working normally. And then in December they weren't.

He was referred to get ear tubes, and after the referral it took almost 6 weeks to get it done. So worst case scenario, he went four months without hearing. But now he's got his ear tubes, the ENT said she drained a ton of thick, goopy fluid, so that's good. We still have some follow up testing to do, but it's looking good. 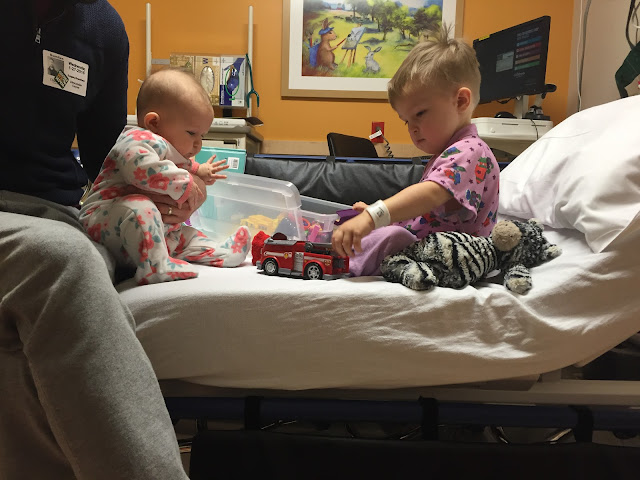 So here's the part where I'm still learning how to be a parent.

Around the time Trixie was born I began to suspect that he wasn't hearing. But I didn't say anything or schedule any tests because no one else noticed it.  That was my first mistake. You can't wait for the experts and the professionals to tell you that something's wrong, because they don't know your kid like you do. You have to speak up for them.

Then, when we finally did figure out that he wasn't hearing us it took SO LONG to do something about it. Everyone is booked out so far. And that brings me to my second mistake. I was afraid of being impolite. Maybe it's Minnesota Nice, maybe it's German Passive-Aggressiveness. Whatever it is, I don't want to inconvenience anyone or ruffle any feathers. So when I called to schedule a consultation for the ear tubes and the ENT was booked out 3 weeks I said "ok, that's fine!" But after one week of scrambling to learn some sign language to use with Johnny and seeing how eager he was to communicate I knew it was not fine.

I was back on the phone with the scheduler, pleading for something sooner, expecting to be denied, when she said, "Are you free tomorrow at noon?"

Parents, you gotta speak up for your kids, even though it may be annoying or inconvenient for someone else. As the old adage goes, "the squeaky wheel gets the grease."

The consultation held no surprises, Johnny was declared a candidate for ear tubes. Then it was me and the scheduler again, trying to find a date when we could do the tubes and an ABR hearing test at the same time.  He needs to be sedated for both, so it makes sense to do them during the same appointment and avoid a second sedation. But because this would involve the ENT and the Audiologist, scheduling was tricky and the earliest availability was four weeks out.

Four more weeks of him not hearing.

I had this nagging feeling that maybe in this case it would be better to sedate him twice to get the ear tubes in sooner, but it took me three days to do anything about it. I called our pediatrician (aka Alex's dad) to see what he thought and he agreed with me, we should get the tubes in right away and worry about the ABR test later. I called the scheduler on more time, was annoying one more time, and she got us an appointment one week later.

So I guess this is what I'm still learning about being a parent:  You have to trust your gut and speak up for your child, because no one can advocate for them as well as you can. And don't worry about inconveniencing someone in the process, because that doesn't matter. Usually people are happy to help.  But you have to speak up first. 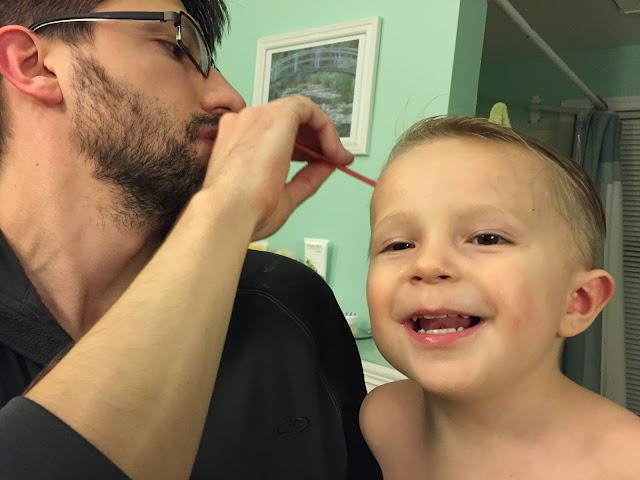