We survived the black hole of the 4th trimester just in time to jump into the black hole of January. Alex is back in class, it's been absolutely arctic around here (on a few days, technically sub-arctic), and Johnny gets a little stir crazy from all the staying indoors. But at least Trixie has transformed from a fussy newborn who needs to be bounced constantly to a very happy infant who takes 3 hour naps. Yay Trixie! 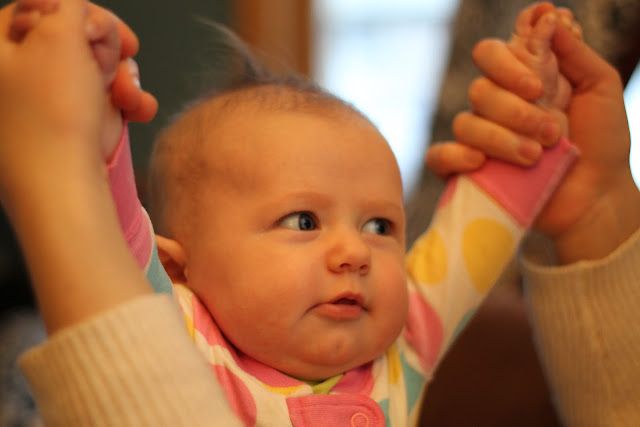 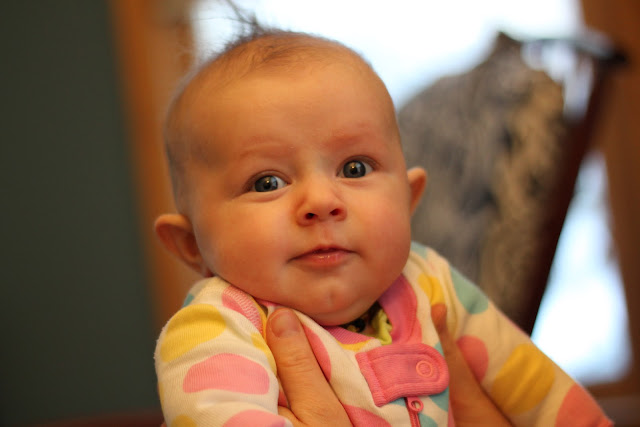 I didn't make any resolutions at the start of the New Year. But the weekend before Alex started class again, when my anxiety was mounting and a knot of dread was growing larger and larger in my stomach, I decided I needed a resolution for the semester, and it is this: to work on my attitude. When the days are long and lonely, and the job of mom never ends, it's easy for me to get into negative mindsets, and to feel sorry for myself. Yes, things are crazy-hard sometimes. I can't control how long the kids will nap, I can't control Johnny's toddler tantrums, I can't control Alex's study load and how much time he will get to spend with us, but I can control my own attitude and how I react to all those things. If I can keep a good attitude it makes everything go so much more smoothly. So that's what I'm going to do.  That's what I'm going to try to do.

I had some pretty big plans for knitting projects over Christmas break, and I only completed one of them. But it was an adult-sized sweater, so that's pretty good I guess. I made this sweater for my mom! She picked out the yarn and the pattern and I knitted it up to say thanks for all the babysitting she does for my while I teach piano lessons. I think it turned out pretty nice! 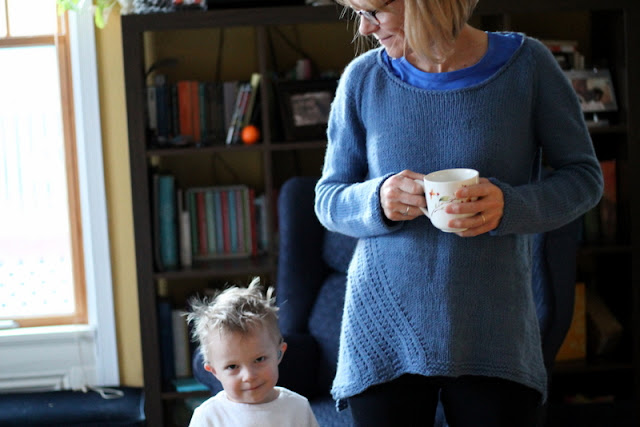 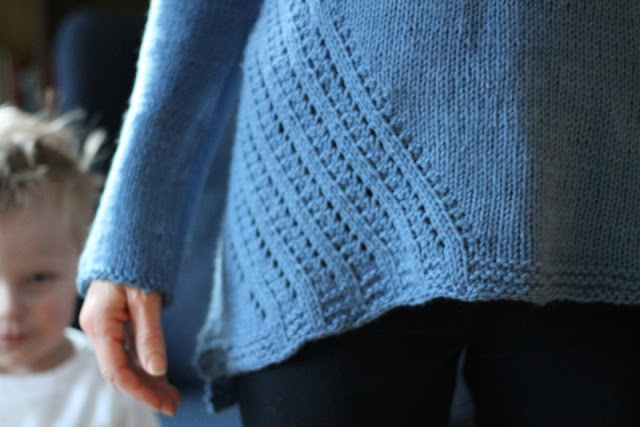 P.S. those photos were taken on a day when Johnny styled his hair with Vaseline.  Thus the crazy.

Another thing that happened over Christmas break, which I totally did not see coming, was that I got really into The Walking Dead! Who, me? Yeah! Totally weird.

Alex has been watching that show for the last few years. I thought it would be way too scary for me, so it's always been the show that he watches when I'm not around. He was catching up on the most recent season over his break, and every now and then I would come in during the last few minutes of an episode. I ended up being drawn into the story and the characters, so I watched the last two episodes of season 5 with him.  And when they were over, I wanted to go back and watch from the beginning. So I did!

It is scary, and it is pretty gory.  It's a zombie show after all.  But it's not really about zombies, it's about the people who are surviving in spite of the zombies, and in spite of other people. It's about family, loyalty, moral dilemmas, and ethics in light of a zombie apocalypse. But if you have a squeamish stomach, you may want to avoid. Also, I think the only reason I could handle it was because I had seen some of season 5, so I knew which characters survived. That made it much less scary.

I read somewhere that season 6 starts up on February 14th.  I know what what Alex and I will doing on Valentines Day!

I had three new recipes in my meal plan this past week. This soup, this soup, and these amazing sliders. And they were all winners! If you're in a recipe rut, I say check these out.

Last weekend I did my first solo mass with 2 kids.  Alex used to be a regular cantor at our parish, but he hasn't done any singing since he started PA school. Last Saturday the cantor for the 5:00 pm mass had a family emergency to attend to and they were in real bind. So I told Alex I was up for trying it alone with the kiddos if he wanted to sing.

And it went...not terribly. Trixie slept in her car seat for the first half and Johnny was very interested in watching Alex up on the altar. Then Trixie woke up and wanted to nurse, and Johnny began to realize he could get away with a lot more. Afterwards I had a few people tell me that I was very brave and that my kids did really well, which was so encouraging, especially when you feel like you're in survival mode during mass.
//7//

Did you realize that Lent is less than a month away? Crazy, but true. It's time to get ready now.  Especially if you want to get a hold of one of beautiful Lenten Devotional Workbooks found in the

Blessed is She Shop. They are going like hot cakes so if you want one you'd better hurry! I'm also giving one away here! I wish I could get one for all of you, but this will have to suffice.  Good luck entering!

for more quick takes visit This Ain't the Lyceum.

disclosure: some links may be affiliate.