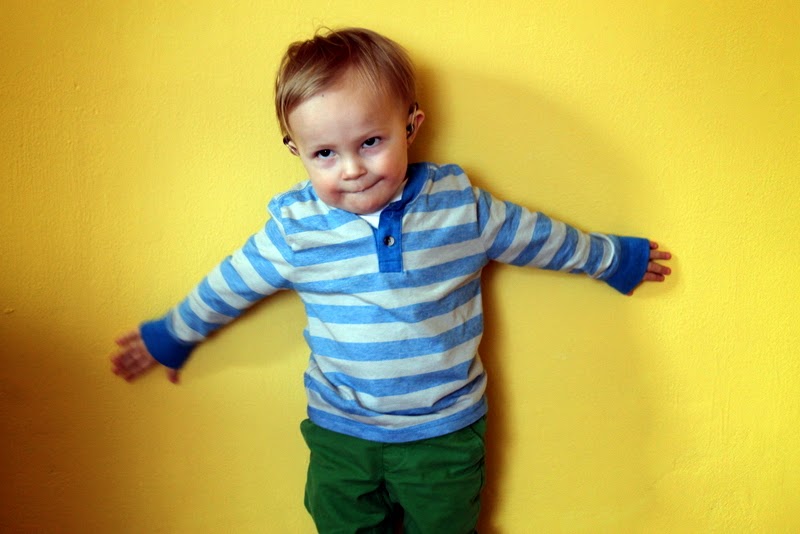 When Johnny is focusing hard on a toy, or looking curiously at something going on outside and we can just see the wheels turning in his head we often say something like this: "I can't wait until we can hear what's going on in that little head."

We're still waiting. Johnny has such expressive faces. It's easy to figure out what he wants or needs. But he remains, for the most part, pretty silent. Sometimes he does pipe up and babble or coo or sing. Then we say something like this: "I love to hear your pretty voice!"

And oh how I want to hear more.

During the first week of Johnny's life, as we were receiving all of his diagnoses, his hearing loss was the least of our concerns.  I was getting letters and phone calls from all the deaf and hard of hearing associations in the state wanting to sign me up for their news letters, and get me involved with a mentor, and put me in touch with a speech therapist and sign language instructor.

And I was so annoyed!

My child is not deaf. He can hear. And his hearing aids are correcting the hearing loss he does have. So what's the big deal?

But as things have wound down with other medical needs, as he's gotten older, and people keep asking, "does he have any words yet?" and we keep saying, "no, not really." we've started giving his hearing loss more attention.


It's hard to say whether Johnny's speech delay is related to his hearing loss, or if it's a part of his shy and stubborn personality. He was born with a mild to moderate hearing loss, he's been wearing hearing aids since he was 2 months old, and theoretically with the hearing aids on, he should hear normally. But he is still at risk for speech delay.

Because of that risk, and the fact that he was 20 months old and had only one word ("up") we started weekly speech therapy appointments in January. They are first thing Monday morning and oh I hate starting the week with a frantic morning of hurrying to get diapers changed and breakfast eaten and coats on and out the door. And sometimes Johnny's shyness and stubbornness dictate the appointments and he doesn't do or say anything and I wonder if it's just a waste of time. But all and all I think it's been good.


The speech therapist first encouraged us to give sign language another try, which we had done very halfheartedly when Johnny was around 8 months old. We did, and within a week Johnny was signing more, all done, bath time, and milk. since then he has added help, open, diaper, waiving bye bye, and a very fuzzy version of the sign of the cross! It's pretty cute to see him sign, but it's even better to see how proud he is when he realizes he's communicating with us.


After he mastered some signs we started trying to get him to say the word with the sign.  This has been a lot harder than just signing. And it often seems like no progress is being made. But he is making progress. Before we started therapy the only word he had was "up".

Now he says all done, more, help, up, bye bye, papa, mama, hot, open, ("mmmpa") and sometimes he'll bath time. He also says ball, bite, and bus, but they all sound the same. And he babbles. He babbles all the time. Well, not at therapy.  At therapy he is basically silent. But at home he babbles all the time. He knows what he wants to say, and he's starting to say it to us.

And I love to hear his pretty voice. 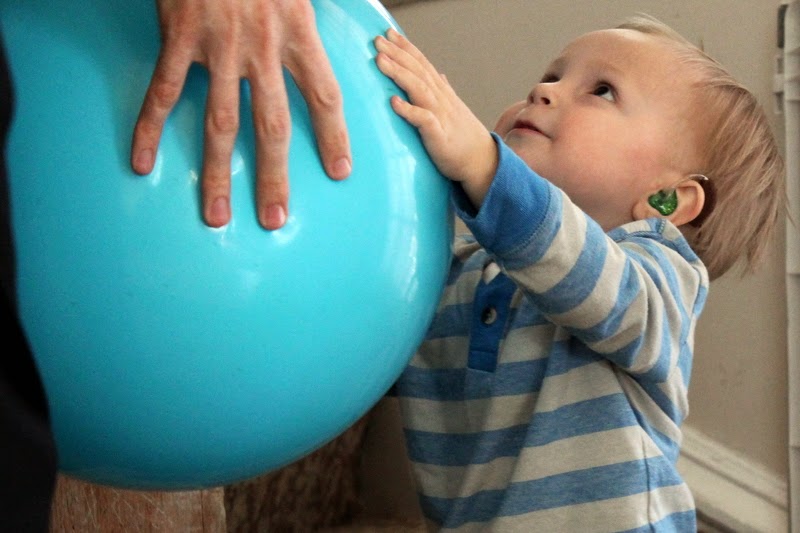