This week I am sharing Caila's story. She mentioned something that really hit home with me; it's the "pangs of guilt" for not realizing sooner that something is wrong. Hindsight is always 20/20 and looking back all the warning signs seem so obvious. It still breaks my heart that Johnny went a day and a half in discomfort before we knew anything was wrong with him.  It's easy to be too self-critical as a mother, when some things are just out of our control. The important thing is to know that now our babies are strong and healthy and beautiful.

The story of Levi's delivery is pretty uneventful, especially in a blog series about the NICU, so I'll make the first part brief. I didn't know I was in labor until I went to my OB for my regular check-up and she informed me that I was 5 cm dilated. It was 11 days before  my due date, so I was surprised but relieved because the doctors were predicting that Levi would be 10+ pounds. My OB told me that I had time to drive home and get my bag (which was packed, thank God!) and pick up my husband, Dave, from work. If Dave were telling this story, he'd be sure to mention that I was doing household chores and stopping for coffee before we went in to Labor and Delivery. I was not going to labor with a caffeine headache! Once we got to the hospital, we watched How I Met Your Mother and Arrested Development on Netflix and my friend Elizabeth came over to bring us food and moral support. I distinctly remember thinking that labor was boring, until, of course, it stopped being boring. Then I neglected all my ideologies about natural birth and got an epidural. Women who give birth without drugs are probably superhuman, but I was happy and telling stories between pushes. All said and done, I labored for about 24 hours and pushed for 25 minutes before I met my beautiful baby boy. Levi Muir was 8 lbs, 6.6 oz (way less than was predicted!) and absolutely perfect!

I was eager to try and nurse him as soon as possible, but he had his little mouth clenched shut and his eyes squeezed closed. In hindsight, that was the first sign that something was wrong, but I had read that babies don't always nurse easily right away and the nurse assured me we'd try again after some skin-to-skin time. Eventually they moved Levi and I out of the room in which I delivered into another room. That's standard, but I still don't understand why. When we got to our new room, some nurses came in to check on us. One of them was a respiratory specialist and looked at my purple, grunting baby and asked how long ago he was born. Apparently he should have gotten the hang of breathing by that point. Before I knew it, there was a flurry of activity in our room. It still brings on pangs of guilt to think about the nurses and specialists crowded around Levi because I was too exhausted to be paying much attention. They took Levi down to the NICU and my husband accompanied him while I dozed in and out of sleep. We were supposed to Skype with my parents that evening and it barely occurred to me that Levi might not be back before our conversation. 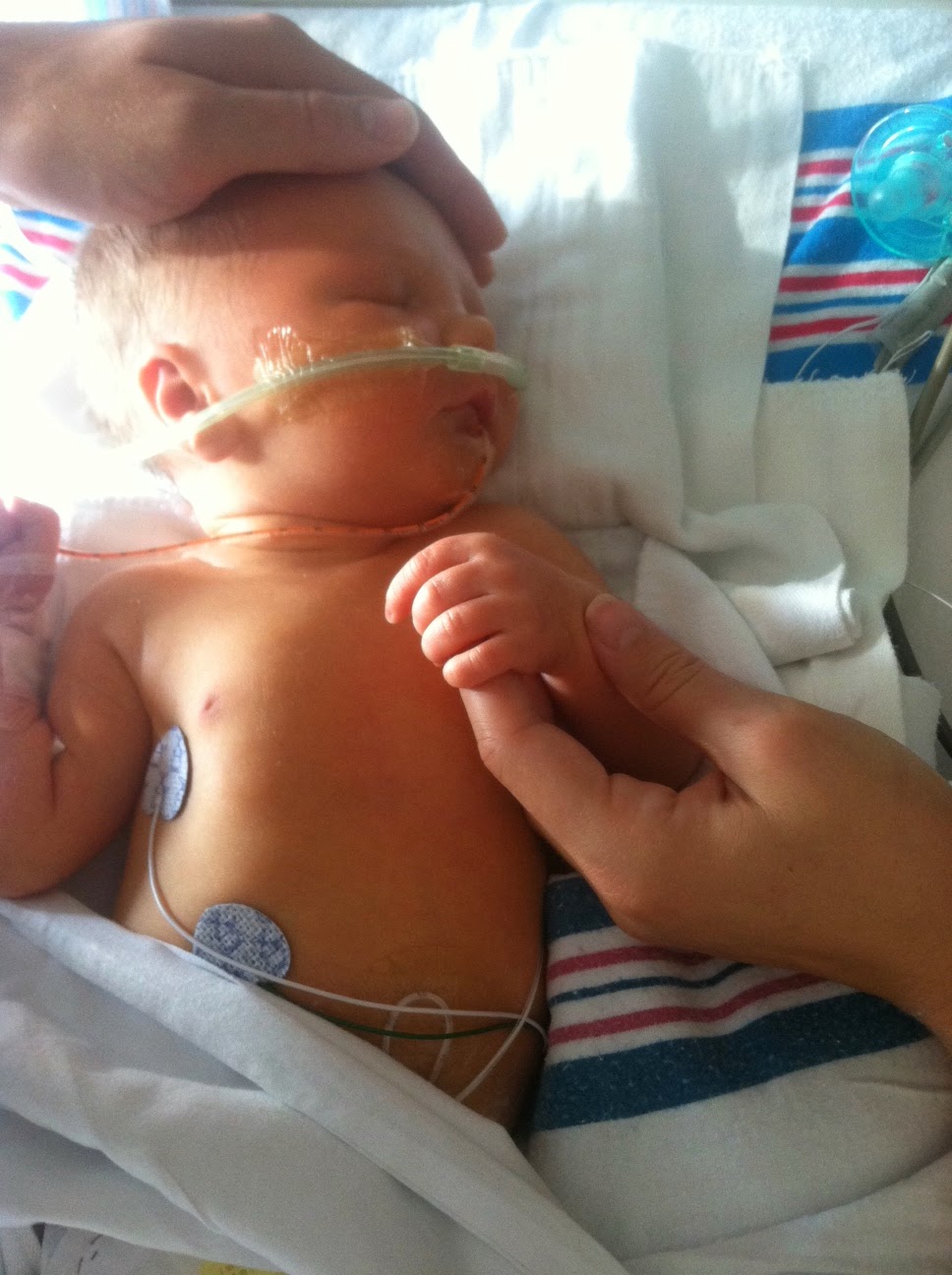 As I reflect back, it seems like the uncertain waiting was the hardest part of this ordeal. They determined that something was going on with his lungs and the NICU manager came in to give us a free parking pass for the hospital ramp that was good for two weeks. TWO WEEKS?! There wasn't a chance we'd have to wait that long to bring him home! Then we learned there was fluid in his lungs and they were going to give him rounds of antibiotics for the next 7 days. I thought if I could just make it through those days, this all would be over. But, NICU staff seem to be notoriously tight-lipped about giving a timeframe and ours just got longer and longer.

At first Levi was sedated because he was a big, strong boy and they were afraid he might pop a lung if he cried too much. We also weren't allowed to hold him for days. It was excruciating to see our boy all drugged and sleepy, and all I could do was touch him with my hands and whisper to him. It's hard to look at my big, lively, wide-eyed boy and remember that sad, sleepy baby. We rarely even saw his eyes open the first few days of his life. His blood oxygen levels were low, so he was hooked up to a CPAP for oxygen, a pick line for IV fluids and lipids, a gavache tube in his mouth, he had an umbilical line so they could draw blood easily, and heart rate monitors. After I was discharged from the hospital Dave went back to work so he could save his vacation time for Levi's homecoming. So, I'd get up every morning and try to take care of my tired, post-partum body and rush into the hospital as fast as I could get there. I'd spend all day standing by Levi's little plexi-glass box and pumping breast milk on the monotonous schedule of a NICU mom. I'd agonize over how much oxygen was flowing through that CPAP, desperate to see it drop from 100% to 26% - room oxygen level. When Dave got off work, I'd go to pick him up, we'd grab some dinner and head back to the hospital until about 11:00. I'd cry every time we left sweet Levi alone for the night. It felt so wrong to leave him there alone. One night I sobbed and told Dave how it just didn't make sense to be away from my baby; he'd been a part of my body for as long as he'd existed and now I was without him. A mom without her baby is the most unnatural thing in the world. 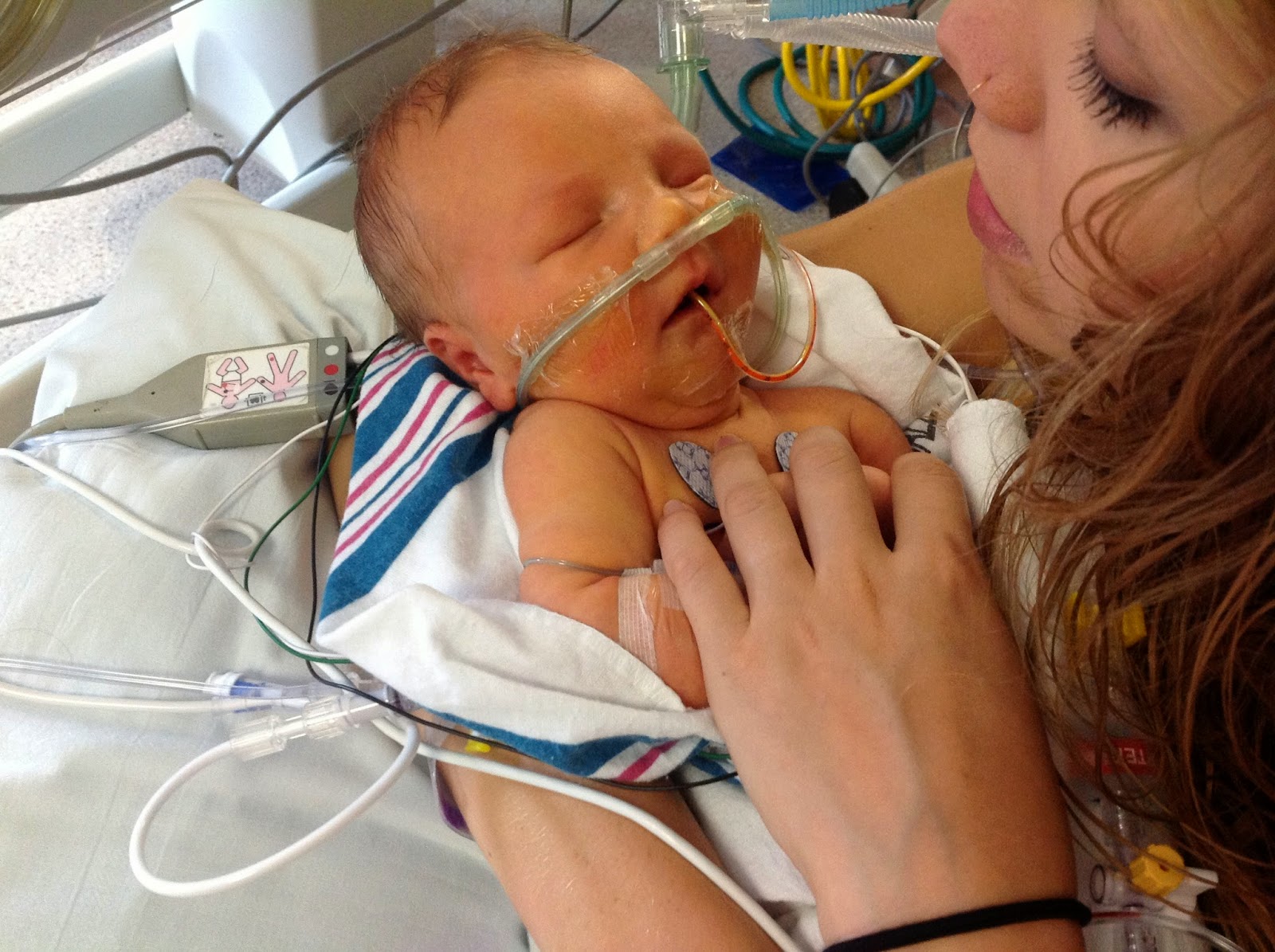 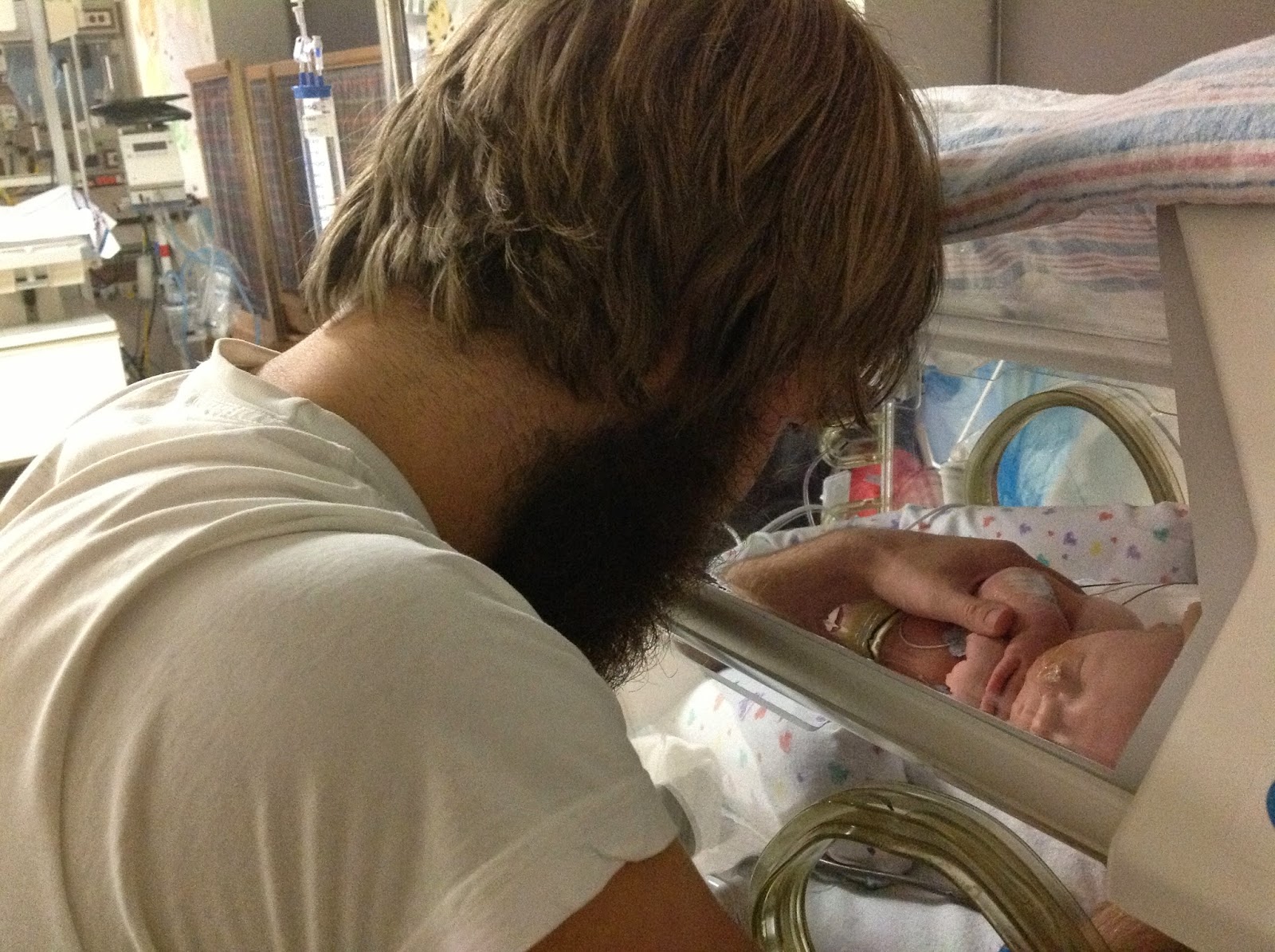 Once Levi's 7 days of antibiotics were done, Dave and I felt confident that he was coming home soon. But the hospital was slow to wean him from IV fluids to milk. Soon agonizing over the CPAP oxygen level was replaced by agonizing over the level of IV fluids as compared to his milk feedings. As any grace-filled Christian should, I'd curse the doctors' names who gave my baby meager milk feedings and then watched the hungry boy fuss and suck his pacifier for the next 2.5 hours. I'd curse their names as they adjusted their timelines for Levi's hospital stay to be longer and longer. I cursed their names when I had to ask for my 2 week parking pass to be renewed. And every once in awhile, at my best moments or the times God felt near, I'd thank God for those stupid, slow doctors who were working so hard to ensure I brought home a healthy baby.

Exactly one week before Levi was discharged, I spiked a fever of 103.7 during the night accompanied by chills that left me shivering under multiple down blankets even though it was a 100-degree July in Los Angeles. The next day, Dave rushed me to urgent care and I cried and begged him to just drop me off so Levi didn't have to be alone. I felt like he expected us to come and the thought of him waiting with the nurses made me so sad. Long story short: I spent a long day in urgent care alone, had a hard-to-diagnose case of mastitis, and couldn't go to the NICU for two days. Mostly, it was my body starting to give out under the stress.

In that last week, we watched the machines used less and turned off. Levi steadily switched from gavache tube feedings to eating orally. He started smiling at the nurses and Dave and I. Finally, FINALLY, 19 days after he was born we got to bring him home.

We are so blessed that he's grown to be big, strong and happy. Even though it's only been 8 months, our NICU days seem like a distant memory. Levi is army crawling around our house like a mad man and pulling himself up on anything he can reach. He's outgoing and social, ticklish everywhere, and smiles all the time. We keep pictures of those NICU days on display at our house; it feels disingenuous to try to forget the pain, but ungrateful not to admire the progress. 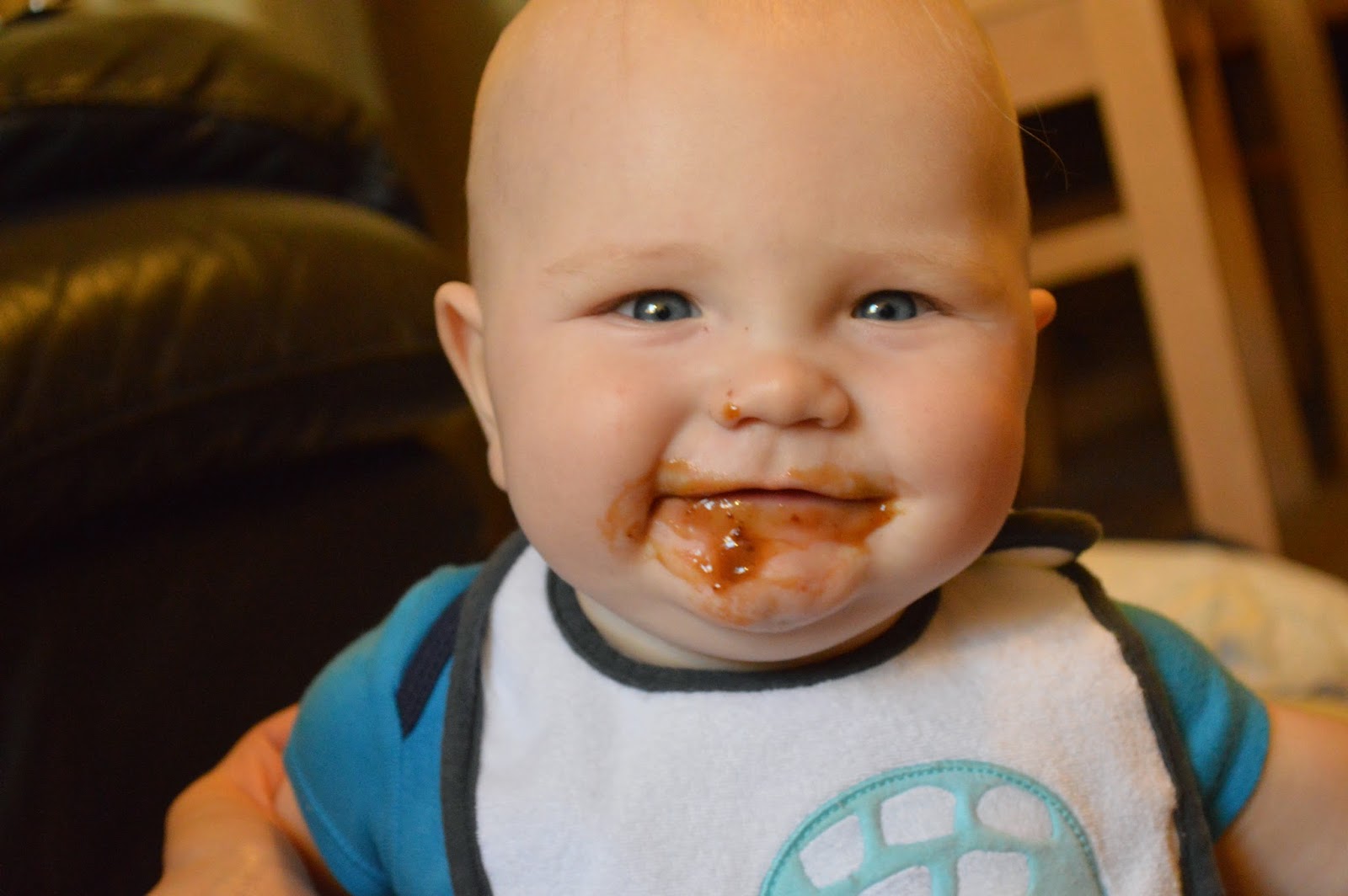 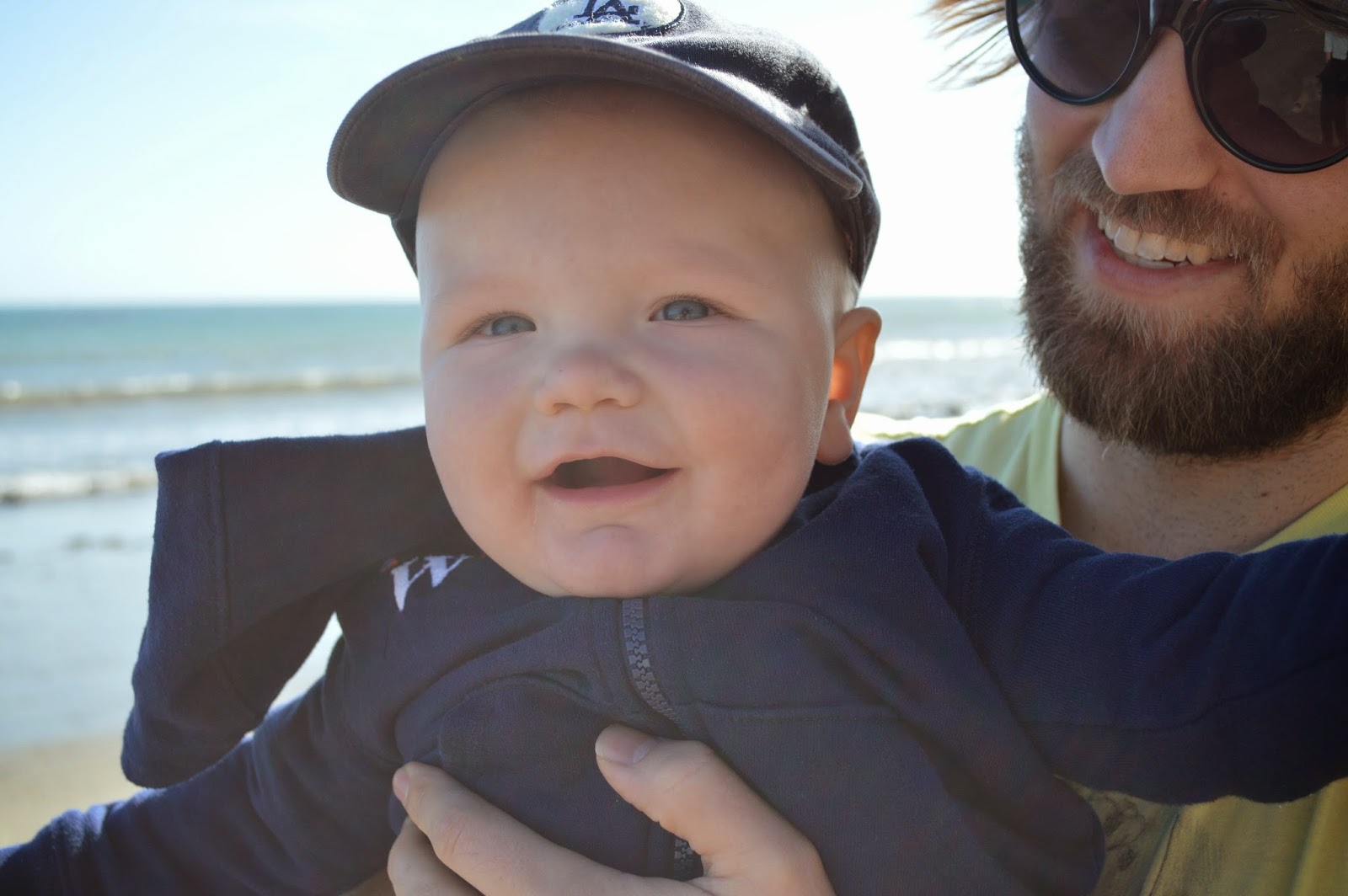