Thank you so much Amanda, for offering your story as the first entry in the NICU diaries.  Your words are beautiful and so many things in your story remind me of our own stay in the NICU.  Especially how easy it is for mothers to neglect themselves because they are so concerned about their babies.  You are all troopers!


Most pregnant women spend a lot of time preparing for the birth of their baby. They read books. They attend childbirth classes. They practice breathing. They watch birthing videos. They envision healthy deliveries. They write birth plans. They decide whether they will medicate, or breastfeed, or circumcise. But that is the extent. Most women don’t plan for a NICU journey. How could they? It’s difficult to prepare for something you can’t imagine. And, unless you’ve been through it, you could never imagine…
Early pregnancy was good to me. I may have been uncomfortable and tired, but I was never sick and it really didn’t affect my lifestyle much at all. But at 37 weeks I developed mild pre-eclampsia and was placed on modified bedrest. I spent 2 weeks lying on my couch, watching movies, reading, worrying. My condition improved with rest so we were able to delay delivery to get me closer to 40 weeks. I desperately wanted to avoid a c-section, and my agreed that I should be able to try for a vaginal delivery. At 39 weeks I was admitted for induction.
There is much to my birth story, but I will try to keep this portion brief. After 8 hours of cervidil and 18 hours of labor I was told that my cervix, which had been 8 centimeters and fully effaced, was now only 6.5 centimeters and swelling shut. I was regressing, which I didn’t even know was possible. I was told that my body was starting to shut down and a c-section would be necessary. I was devastated. After all we had been through I would still be heading to the operating room. My c-section was not quick, nor was it easy. I was in terrible pain, despite the epidural, and felt that someone was sitting on my chest throughout the operation. (I would find out later that, in fact, a nurse was sitting on my chest and pushing down on my baby from above.) I was heavily medicated due to my level of discomfort, so while I remember everything I felt like I was in a haze. I remember finally feeling the pressure in my abdomen subside and then hearing that first, glorious cry. He was here. And he was 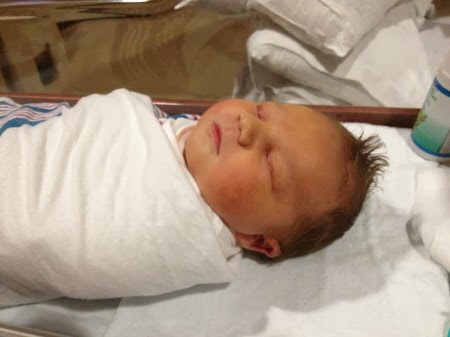 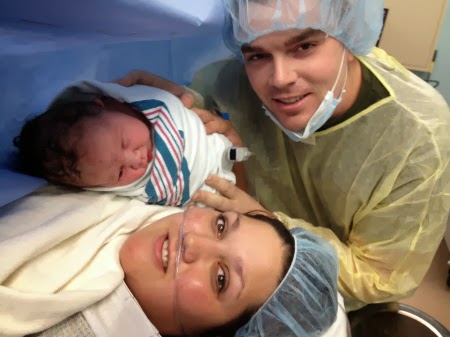 Our sweet baby boy arrived at . 10 pounds 3 ounces! 21 inches long. Perfect in every way. Except one. He wasn’t breathing well on his own. I was told that he would need to be taken to the NICU to be started on oxygen and antibiotics. I had been so averse to considering a c-section that my husband and I didn’t discuss it much prior to my delivery. But the one thing I made sure he knew with certainty was that under no circumstances was he to leave our baby’s side. So Jeremy followed baby to the NICU, and my c-section was completed and I was wheeled back to my room to recover. Jeremy finally called me from the NICU around . (He had been told I would be sleeping; and I should have been, but was so anxious for news of my baby that I couldn’t rest.) He said that the nurses had started an IV and Brantley had received doses of two antibiotics and was on oxygen in an incubator. He said “He’s just been so calm through all of it. We’re just staring at each other.”
It was killing me that I hadn’t seen my sweet baby yet. My nurse was still too busy to take me to the NICU (the unit is locked, so I needed a staff member to be able to take me). I felt helpless. I hadn’t seen, let alone held or nursed my baby. I longed for him. I wanted to be able to breastfeed, and my nurse was very busy and completely overwhelmed by her workload, so I ended up calling the operator and having her connect me to the on-call lactation consultant, who came to my room and helped me get set up to start pumping right away. I got a few drops of colostrums the first time I pumped, and the LC assured me that that was a really good thing. I felt encouraged for the first time in days! I finally felt like I had a little control over something.
Around , my nurse came to check on me, and I insisted that she take me to see my baby! She helped me stand and walk a little. I was in terrible pain, and my legs still felt weak from the epidural and from being in bed for so long. But I knew that I needed to be able to walk if I wanted to see my son, so I pushed on. My nurse finally wheeled me to the NICU, and with her on one side and my husband on the other I made the long walk to Brantley’s room at the back of the department. I stood in the doorway of his room and just stared. Here he was. Finally. My sweet boy. Here in front of me. Already 12 hours old. And it was so very bittersweet. He looked so tiny in an incubator, hooked to monitors with an IV in his hand, oxygen tubing in his nose and a feeding tube in his mouth. I sat next to him and just stroked his back. He was so beautiful. And looked so little. And all I wanted was to hold him and cuddle him and love on him. And I couldn’t. His oxygen levels weren’t stable, so we weren’t able to move him from the incubator. I tried to put all of my love into those caresses. And I prayed that he knew how much I loved him, even if I couldn’t hold him close. And my heart broke a little bit, minute by minute, as I sat and stared at him. 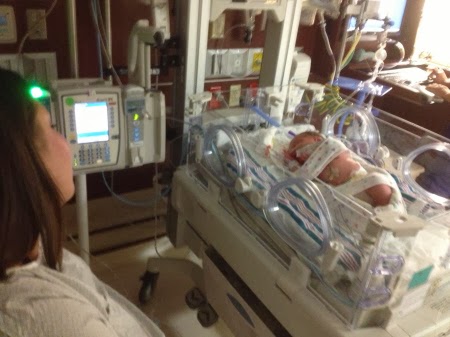 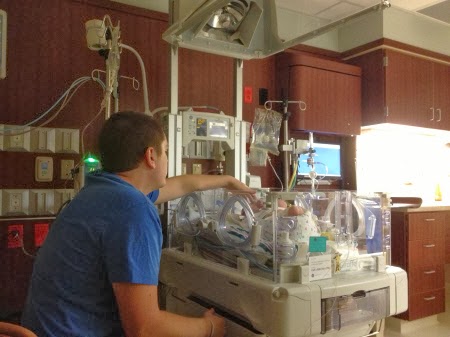 At shift change the nurses encouraged me to go back to my room to get some rest, and when I came back around my nurse told me that Brantley’s oxygen levels were stable and I could finally hold my baby! I was so excited, but completely overwhelmed. I felt like this was the culmination of my pregnancy and delivery. So much excitement, and fear, and disappointment, and anticipation. I sat next to his bed and the nurse wrapped him up, monitors, tubing and all, and placed him in my arms. And tears streamed down my face. Incredible love overwhelmed me. And an innate desire to keep this precious little being from any pain or harm. And here he was with tubes and wires all over him, and there was nothing I could do to ease his pain. And for the first time in my life I truly glimpsed the sacrifice the Lord made in sending His Son to die for me. It was the most humbling moment of my life to date. 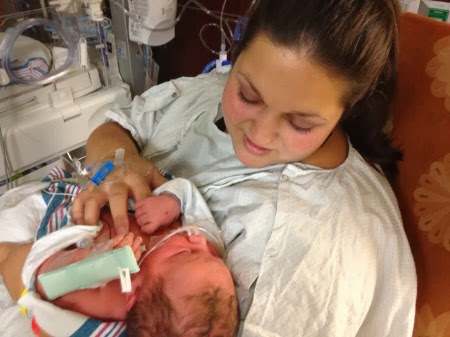 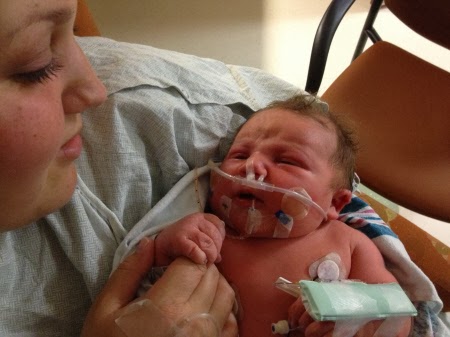 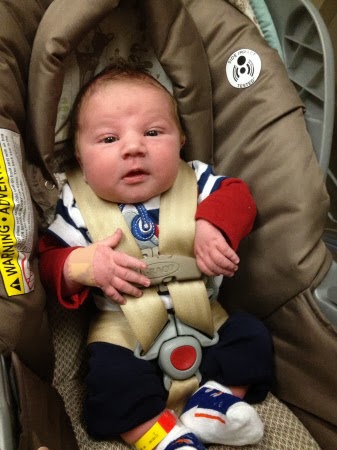