This week I am so honored to be sharing my sister-in-law's story of being in the NICU with our sweet nephew. EJ was born 10 weeks early! I remember the day we found out Shannon had needed an emergency c-section and that she was still waiting to see her baby for the first time.  The memory of our NICU stay was so fresh in my mind that I couldn't help crying throughout that entire day. We had a hard enough time being in the NICU for 9 days with Johnny. I am truly inspired by Shannon and Peter and how well they handled being in the NICU for 39 days!

One of the many reasons my husband and I chose the hospital we did for our baby’s birth was because it has a Level III NICU that is considered one of the best in the country, but we certainly never expected to need it.   When our son EJ was born at 30 weeks gestation weighing 2 pounds and 7 ounces, we could not have been more grateful for it.
EJ’s premature birth came as a complete shock.  My pregnancy had been going very smoothly, and my doctor described it as ideal as recently as one week before EJ’s birth.  We had no reason to think anything would go wrong.  When I thought I was experiencing heartburn and went to the hospital just to be safe, never in a million years would I have guessed that I would be rushed into an emergency c-section and be meeting my baby in just a few hours.  I developed HELLP Syndrome almost overnight, and it was so severe that my baby needed to be delivered immediately for my safety.
The many, many times I pictured meeting our baby for the first time, it was always a moment of overwhelming happiness and joy.  It would be the happiest day of our lives!  In reality, the day we met our baby was terrifying.  The first time I saw EJ, which was about five hours after he was born, I felt scared, helpless, and heartbroken.  I felt like I had failed him.  I couldn’t keep my little boy safe, and he had to come out before his tiny body was ready.  I was devastated. 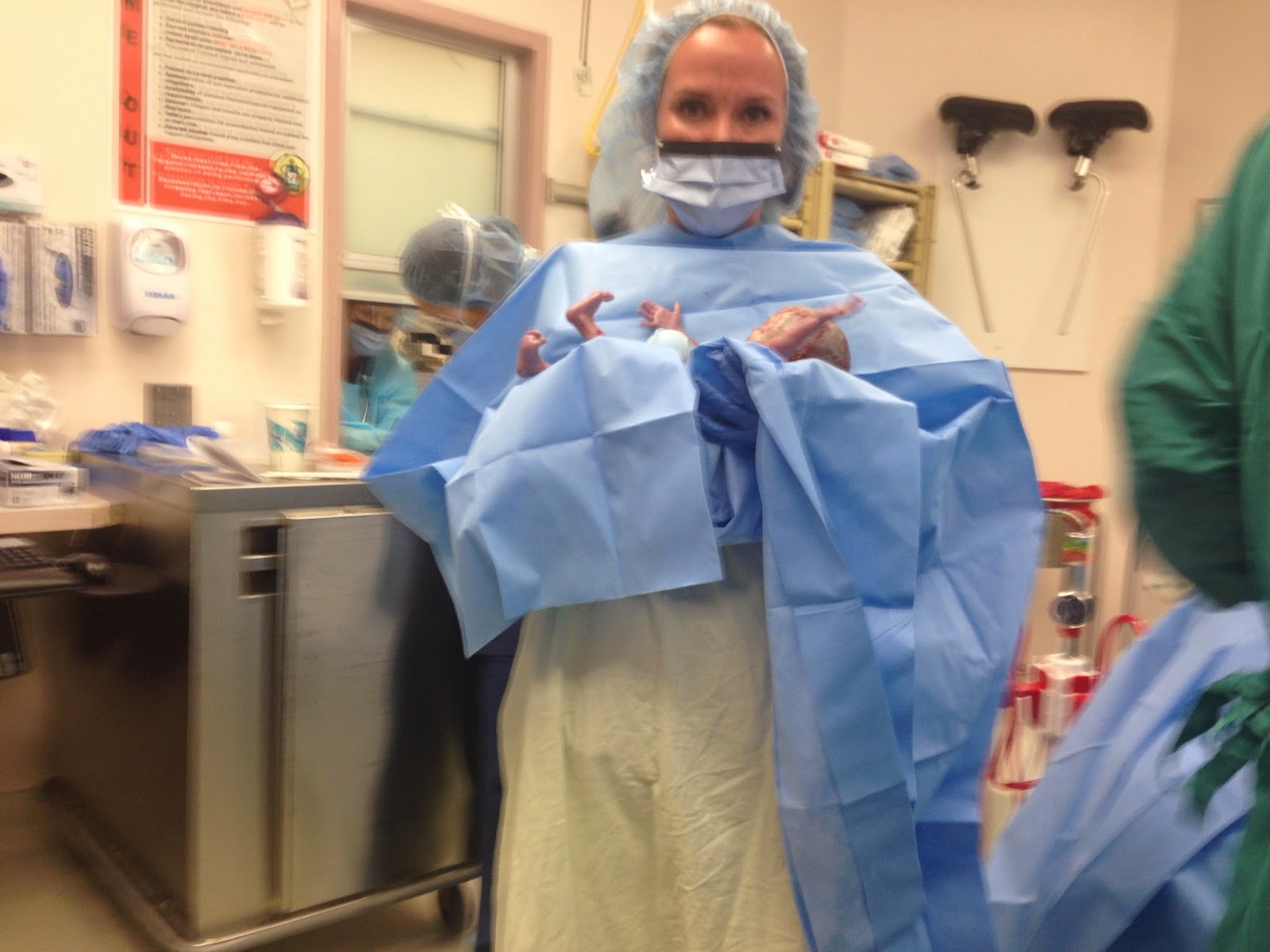 EJ’s first photo!  My husband got a quick glimpse of flailing arms and legs as EJ was rushed to a team of waiting doctors and followed EJ to the NICU, but it was about five hours before I got to see EJ for the first time. 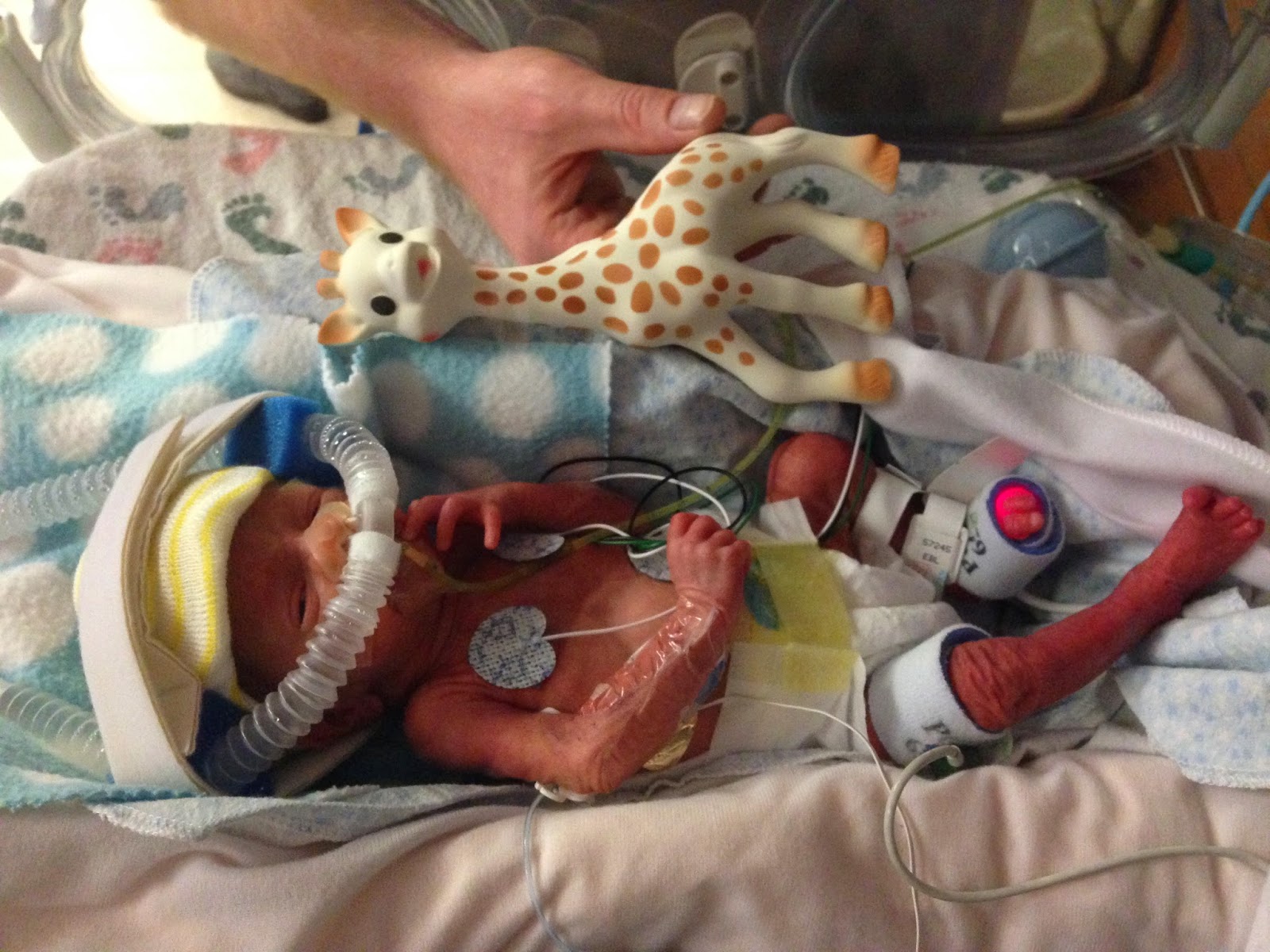 EJ was 14.5 inches long and not much bigger than Sophie the Giraffe. 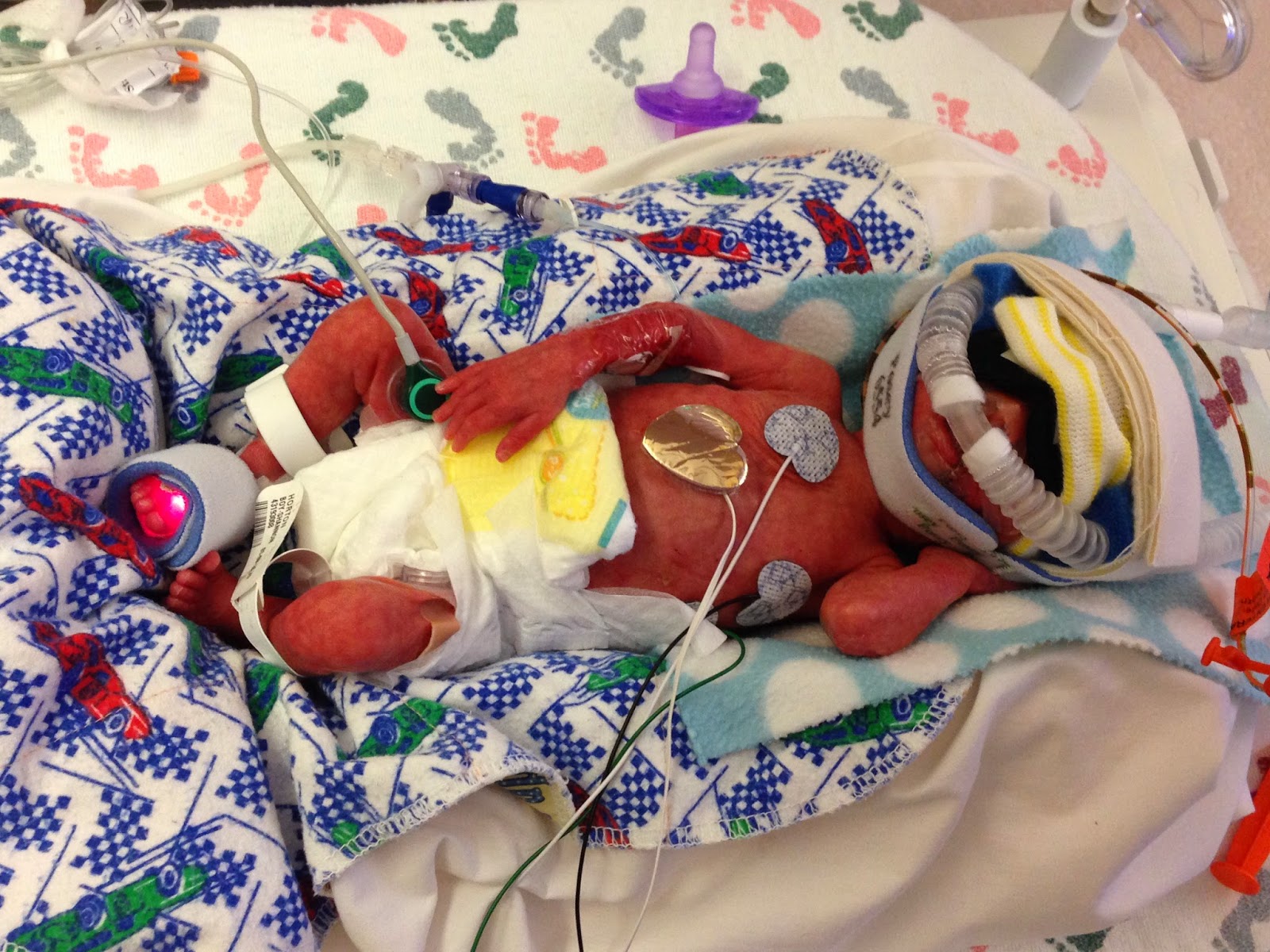 It was days before we knew what his face looked like under all the tubes.

EJ ended up being one of the lucky ones.  After a very scary first week during which he showed signs of a life threatening condition, he pulled through and never looked back.  From week two on, he was considered a feeder and grower, which meant he just needed to grow and mature (be able to drink from a bottle, maintain his body temperature, breathe on his own) so he could go home.   Even so, NICU life means constantly having to brace yourself for something to go wrong, and it is incredibly stressful.  I cried every day until EJ came home, which he did after just 5 and a half weeks (at 35 and a half weeks gestational age) and weighing exactly 4 pounds.  Now THAT was the happiest day of our lives! 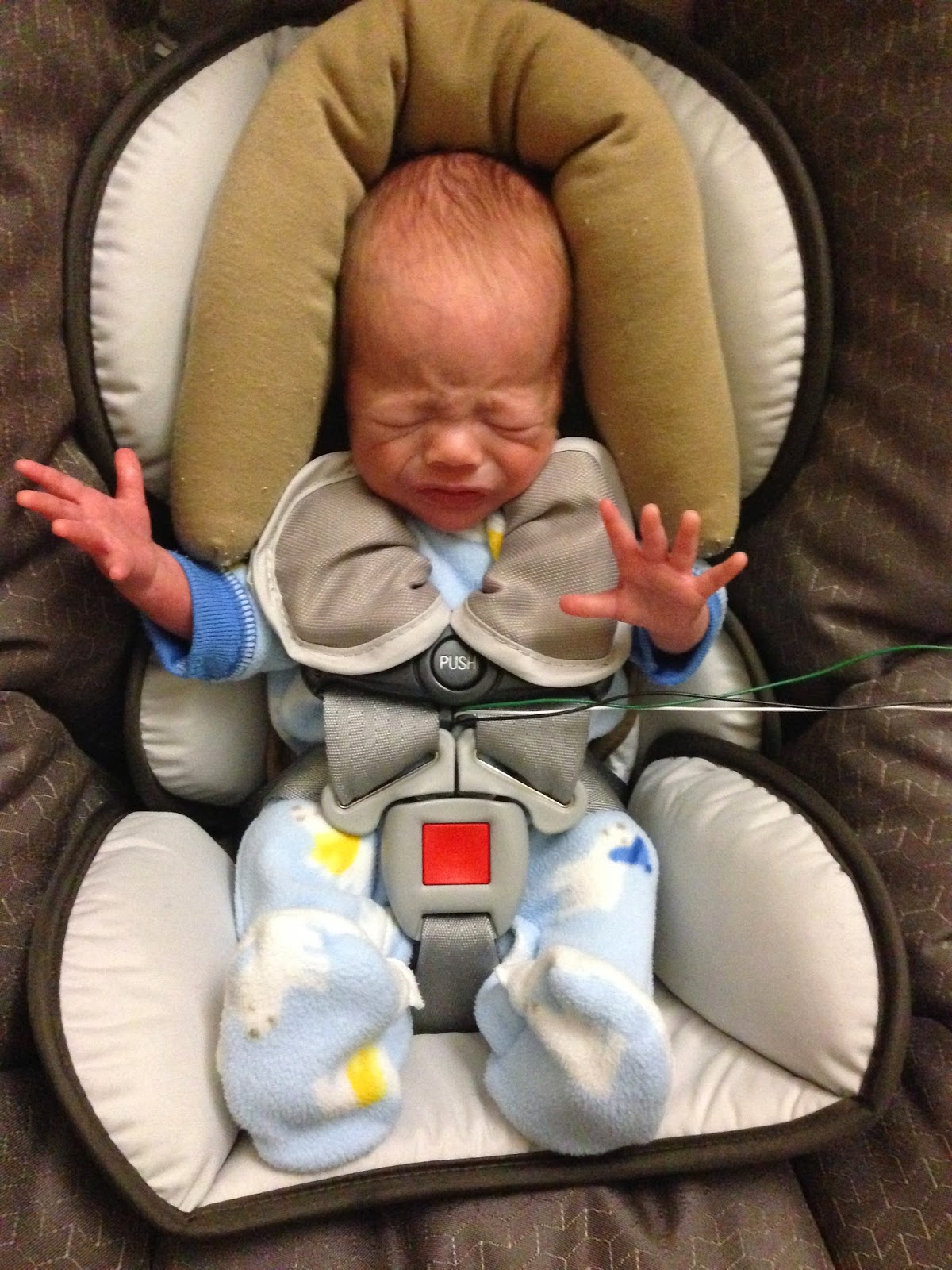 EJ wasn’t very impressed by his first experience with a car seat.  He weighed 4 pounds- the weight minimum for his seat.  My husband was excited to get to watch a Chargers game at home with EJ!

Fortunately, we were at a very supportive hospital.  We could visit EJ in the NICU 22 hours a day, a lactation specialist had me pumping within hours of EJ’s birth, and the nurses encouraged us to take as active a role in EJ’s care as possible.  We were changing his diapers, taking his temperature, giving him baths, feeding him, and doing anything else they would let us.  I would strongly encourage all NICU parents to be as involved as possible.  Insist if you must!  There are many things that we can’t do for our babies while they’re in the hospital, but there are also a lot of little things that we can do that can give us a tiny sense of control in a totally unpredictable situation.  It also helped me feel more like a real mom, which is hard when you’re not your child’s primary caregiver.  One day, I overheard our nurse briefing her replacement, and she said that the new nurse didn’t have to worry about checking on EJ because his parents were here and they were very independent and capable.  I beamed. We were wondering if EJ would arrive in time for Christmas or not.  We never expected to have him here for Halloween!  My mom made his cape, but we learned that lots of preemie parents go to Build-A-Bear Workshop for costumes.

While the NICU was EJ’s home, we made it our home, too.  We hung up a banner and pictures EJ’s cousins drew for him.  We brought as many of EJ’s own items (blankets, clothes, hats, toys, boppy) as possible for him to use.  We asked question after question--how they did things, why they did things, did they expect that process to change?  I pumped there, we took naps there, we brought a laptop, and we set up camp.  We celebrated every tiny accomplishment, like when EJ went from 1 ml per feeding to 2 ml.  Do you know how tiny a ml is?  It’s nothing!  But it was everything.  Making ourselves at home made it easier to spend as much time with EJ as we could and helped us feel like a family. 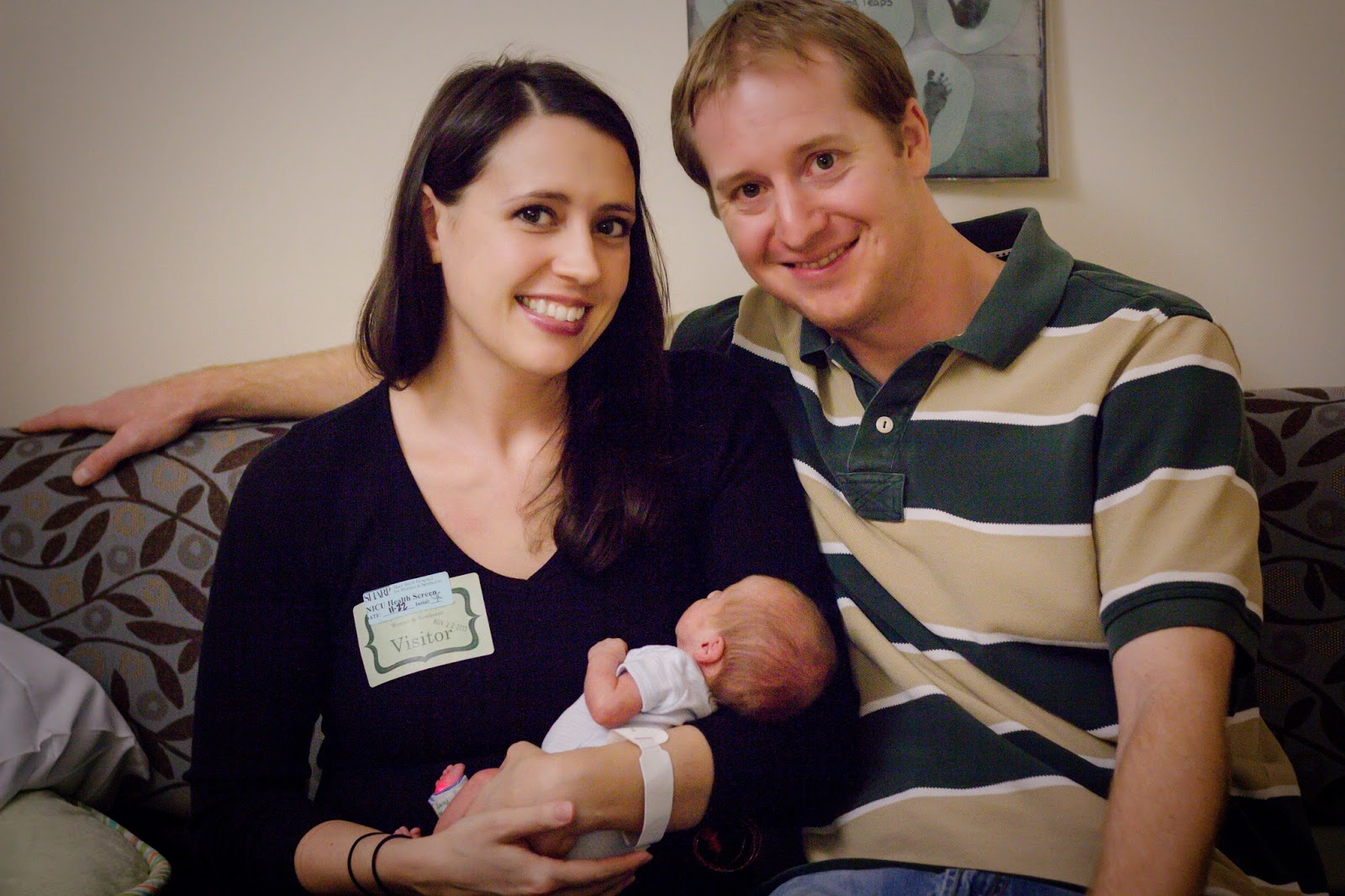 This picture is from our Tiny Footprints Project shoot and was taken three days before EJ came home.  We didn’t know it at the time, but our NICU stay was almost over!

EJ’s 39 days in the NICU were the hardest of our lives, but like all memories, the bad is fading and we’re focusing on the good.  EJ is alive, healthy, and thriving.  He shows no ill effects from his premature birth and will be five months old (11 weeks 3 days adjusted age) tomorrow.  He’s such a smiley, happy little guy and by far the best thing that’s ever happened to us.  I have a sense of love and gratitude the likes of which I previously never knew.  We were lucky, and that’s not lost on us.  People who don’t even know us were praying for EJ, and the deacon who came to the hospital to baptize EJ had our entire congregation praying for him at every Sunday Mass until he came home.  Every day my husband or I still mention how fortunate we were or how grateful we are to have our baby boy.  We take cookies and cupcakes to the nurses, but it never feels like enough.  How do you say thank you to the people who saved your baby’s life and cared for him when you couldn’t?  One nurse told me the best way I could thank her was to take good care of EJ, and that’s exactly what I’m trying to do.
I have come to think of being a NICU parent as the best club that you never want to join.  There is a great sense of community among NICU parents, and in our case in particular, a kinship among preemie parents.  You had a preemie?  I may not know anything else about you, but I will do whatever I can to help you, like other preemie parents did for us.  I know the agony that you’re in, NICU parents.  I know the worry and the tears. I know how hard you fight to breastfeed, and I know how heartbreaking it is if it doesn’t work out.  I know how hard you are on yourselves when you’re not with your baby.  I know the guilt you feel.  I know you can’t eat and you can’t sleep, but try.  I want to tell you that everything will be okay, but I know that may not be true.  I sincerely wish every NICU story went the way EJ’s did, and I hope your sweet NICU babies will be all right.

*****
I can’t write about our NICU experience without plugging the Tiny Footprints Project! The Tiny Footprints Project is a group of professional photographers who donate their services to NICU families free of charge.  They arranged for a photographer to come to the hospital to take pictures of EJ, and a friend of mine recently used them, too.  Getting professional pictures of EJ taken gave me something fun and exciting to look forward to in the midst of such a horrible experience, and I’m so grateful!  You can see some of our TFP photos here.