Two months before Johnny was born my cousin and his wife had a little baby boy who had to spend time in the NICU.  We were praying for the health of their baby as my pregnancy was coming to it's completion. Then when Johnny was born and we were in the NICU with him, they prayed for us. Bethany was someone one who gave us such beautiful words of encouragement while we were there. Last summer Johnny and Austin got to meet each other and you'd never guess to look at them that they both started off in the NICU! I am so pleased that Bethany was willing to share her story here.

I had an easy pregnancy, with no complications at all, and went into labor on my own on the morning of Holy Saturday, 2013.  I had planned to have a VBAC because I missed the first hour or so of my older daughter’s life while in recovery after the c-section.  With my firstborn, I had to be put under general anesthesia for the section, so I didn’t see her right away.  My husband had already taken pictures and texted them to family before I saw her face.  Not wanting to miss a moment of my son’s birth, I prepared for a VBAC, and I got an epidural early on (I had tried to go all natural with my first), so I wouldn’t have to go under general anesthesia a second time.

You can probably tell where this story is going.  It was Holy Saturday, and I had just got the epidural when the nurse noticed that I was running a fever.  “Sometimes that happens with an epidural,” she said.  She came back and checked a little later, and the fever was still there.  I think she had given me a Tylenol, to no avail.  That was the first sign anything was wrong.  I was put on IV antibiotics, as a precaution.

Other than the IV antibiotics, labor progressed normally.  There was meconium in the waters, but that had been the case with my daughter, too, so I wasn’t too worried.  My son’s heart rate was a little high, but not alarmingly so.  At one point I thought I might be headed back to surgery, but my doctor let me keep going.  Around midnight, I started to push.

As always when a baby is about to be born, the hospital room filled with people.  The presence of meconium in the amniotic fluid meant that a team from the NICU must be present at the birth as standard procedure.  I would learn later that our story is an example of why the NICU team comes every time there is meconium, even if most of the time they aren’t needed.  We are the statistical rarity that they come for, and I thank the Lord.

The nurses and my husband were helping me push.  My doctor had arrived, and he was ready to catch my son.  “He needs to come out,” said my OB (who I love).  I pushed hard, prayed to God, got an episiotomy, and boom!  My son was born at 1:14am on Easter morning. 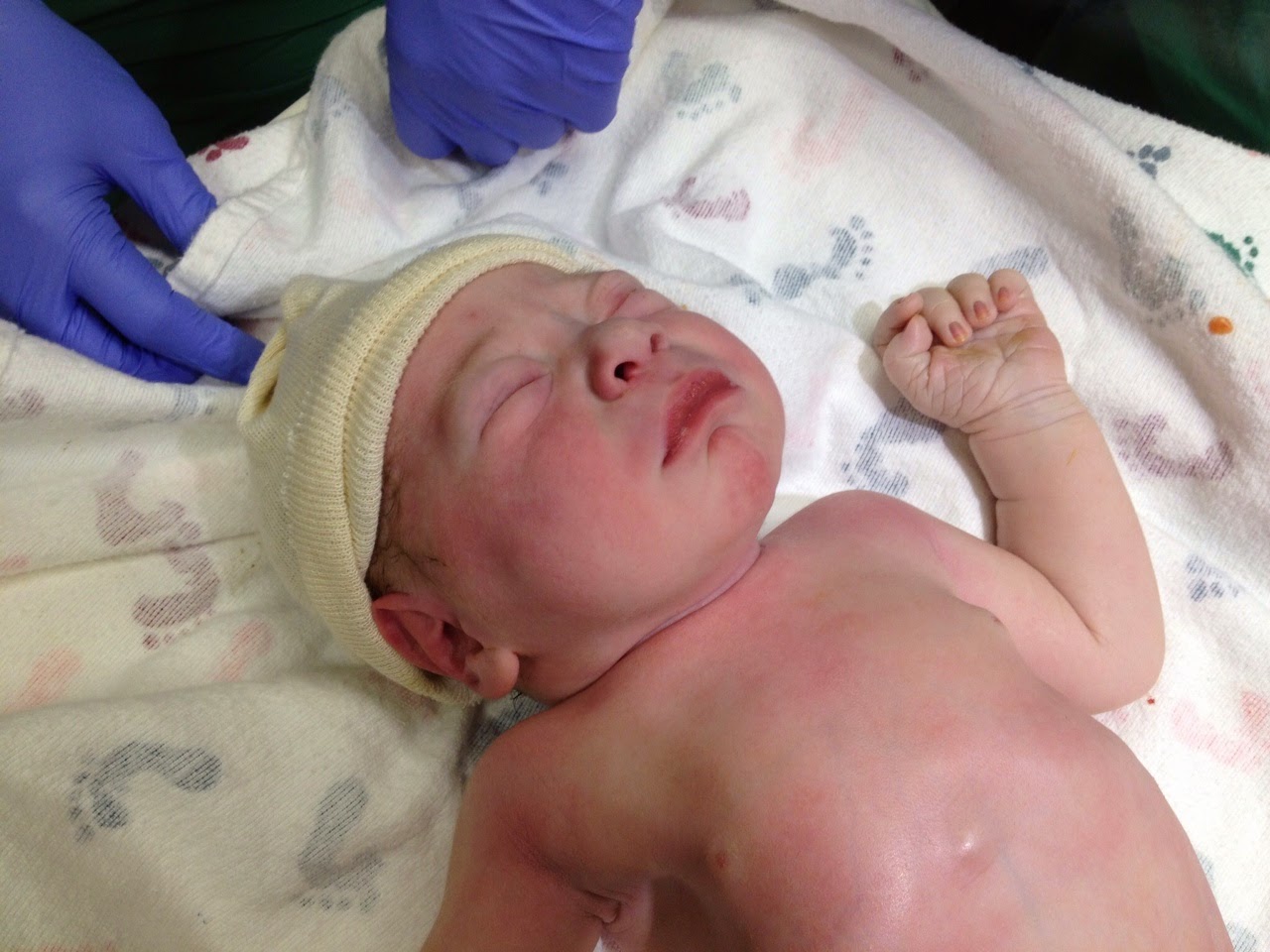 He didn’t make a sound.

My OB quickly cut the cord and passed my son back to the NICU team.  Two neonatologists and two nurses worked on him, suctioning his nose and mouth, giving him an oxygen mask.  I watched as one of the doctors held up the umbilical cord straight above his little body and squeezed the blood in the cord back into his body.  The cord had been wrapped around his neck; he had aspirated meconium; he had an initial APGAR score of 2.

When you are waiting for your newborn son to cry, you lose all sense of time.  I have no idea how long it was before we heard his voice.  The room was quiet.  My OB doctor and the nurses who had attended me busied themselves, though I paid them little attention.  I tried to read the room for signs to see whether or not I should panic.  Everyone was so quiet.  My doctor had his back to the NICU team while he waited for the placenta.  I saw him cock his head in the direction of my baby, as if better to hear.  That worried me.  Then he cried.  Praise God, he cried.

We named him Austin Immanuel, in part because we had felt (already) that God had been with us through a difficult time.  The nurses brought him over to me for a hug.  He looked beautiful to me.  I kissed his cheek.  Then they took him to the NICU, where he would stay for 17 days.

When I look back at photos of his birth, he looks so sick to me.  Immediately after he was born, he looked puffy and pale.  I did not notice this at the time.  Such is a mother’s love, I suppose.

Then I started hemorrhaging.  I lost a lot of blood, and my placenta came out in pieces.  I was only dimly aware this was even happening at the time, to be honest.  I am glad I had a medical team to take care of me because I was in no condition or frame of mind to think of myself whatsoever.

Turns out my placenta had gotten infected during labor (hence the fever).  Bacteria that lived in my body traveled up through the broken waters and infected my placenta and my son.  It happened very quickly --- so much so it astounded all the doctors who heard it.  I was not high risk for this.  My waters had only been broken for a few hours, and my son was full term.  It was a fluke of epic proportions.

Later, I would tell my doctor I had found a statistic online that said what we had suffered had something like a .0008 percent chance of occurrence.  “That sounds high,” he would say.

Anyway, the next morning I was finally deemed stable enough to visit my son.  I had seen him via Facetime in the night (my husband thinks we should be in an Apple commercial for this! Haha).  Little Austin was on oxygen, an IV through his belly button, and several monitors.  We said hello, held his hand.  There was not much we could do.  He was not stable enough to hold him.  They were still running tests and had not diagnosed his infection yet. 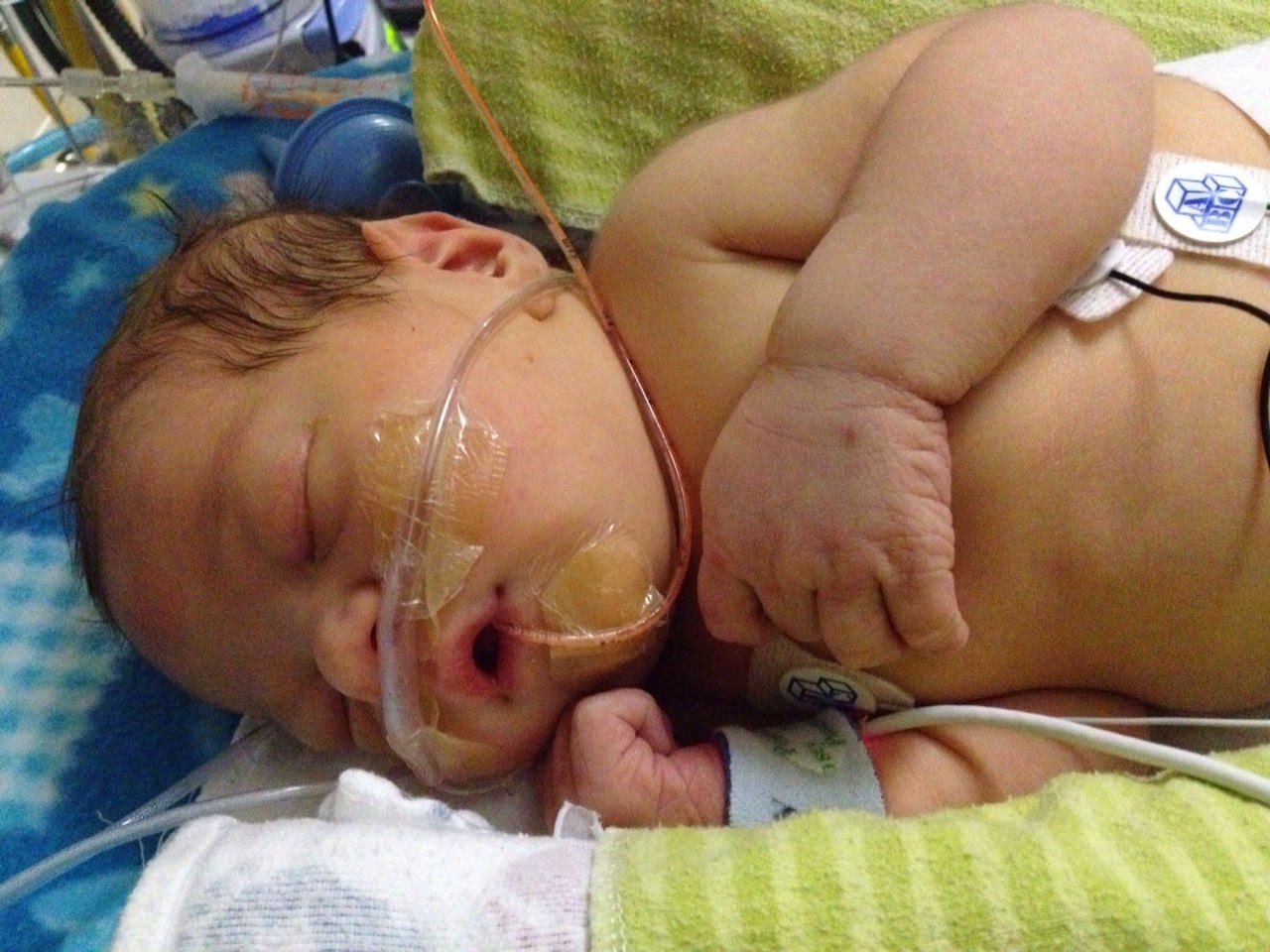 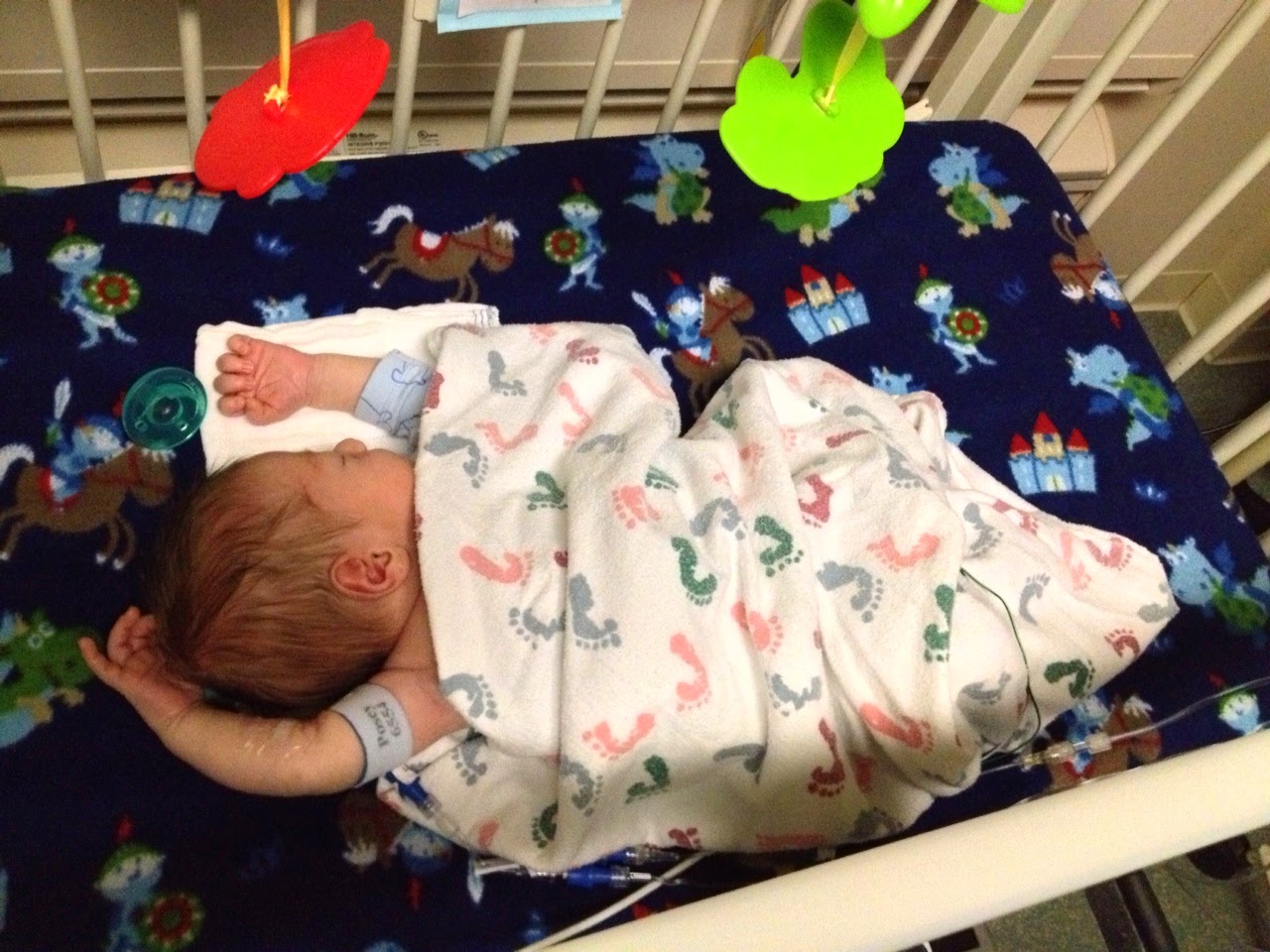 Although I could stay in the NICU all the time, day or night, I found that I could not handle being there without a break.  I felt completely helpless.  I was completely helpless.  I had to hand my son over to the nurses, the doctors…well, to God, really, and trust that through this medical care God was providing my son what he needed.

It was three days before I could hold him.  Suddenly, with my son in my arms, everything was so much better.  I felt I could handle all this, if only I could hold him.  I felt the effects even in my body.  I could sleep.  And immediately, my milk came in.  I am still amazed at that. 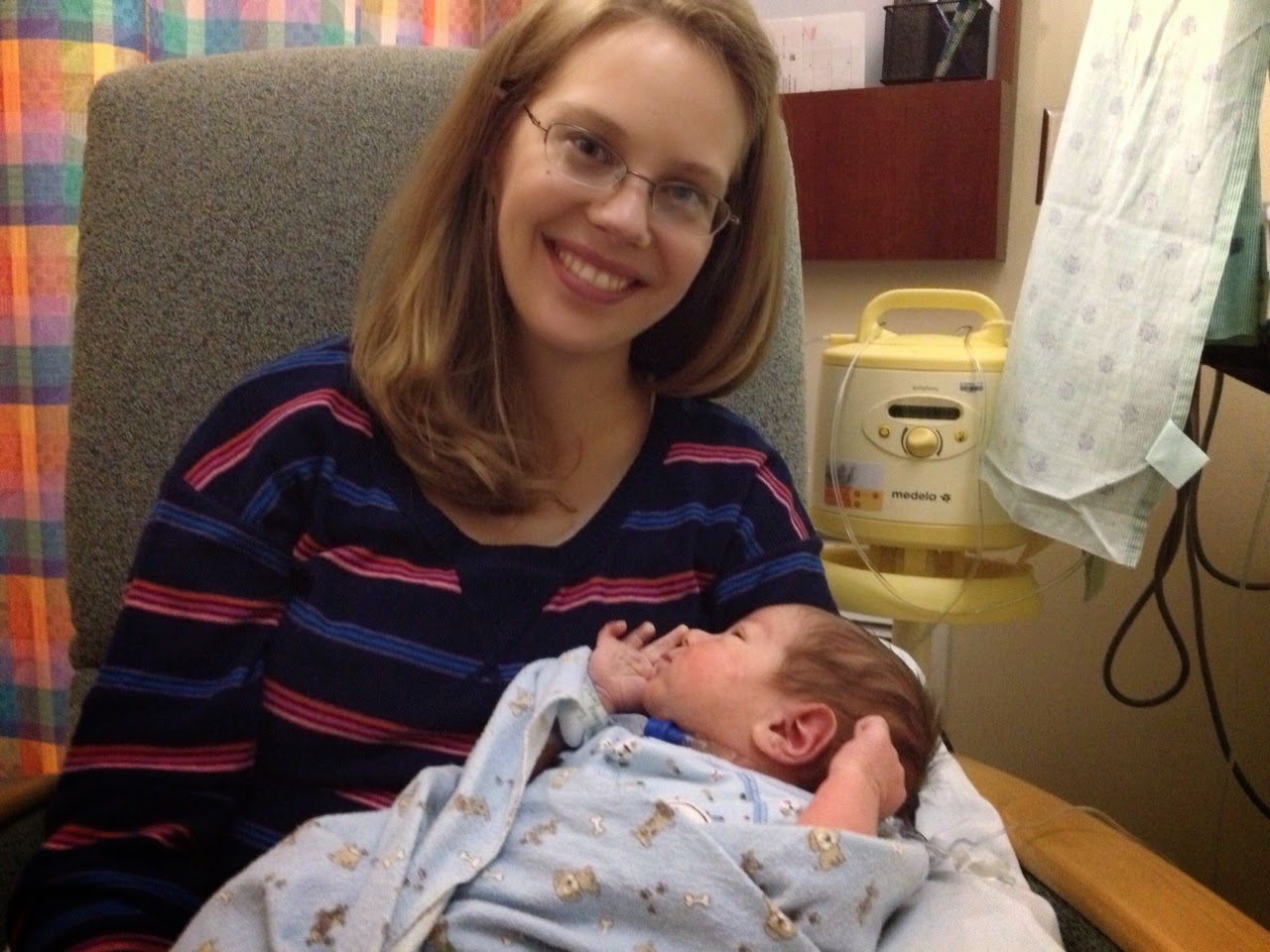 Later that day I was discharged from the hospital.  It was good to be home.  I found a lot of comfort in my routine care for my 17-month-old daughter, who was oblivious to all the stress.  She had been missing me, even though Nana was pretty cool.  It was helpful to me to be able to care for at least one child – there was so little I could do for my son, I really needed to care for my daughter.  I slept in my own bed, and woke only to pump.

Our days began to take shape.  In the morning I would care for my daughter and put her down for her late-morning nap.  Someone would come to relieve me, and I would drive to the hospital to see my son.  I got to know the nurses in the NICU (wonderful people).  I would hold my son while he slept, or try to nurse him, or sometimes just watch him sleep.  Some days I spent hours holding him on my chest, skin to skin.  Often my husband would stop by after work.  Then we would head home to have dinner and put my daughter to bed.  Some nights I would go back to the hospital.  But I would sleep in my own bed and be home when my daughter awoke.

And that was our life for a couple of weeks.  We had lots of help.  My mother, my mother in law, and a close friend all took shifts.  I cried on and off.  I tried to relax the muscles in my face, but I never could.

Gradually my son recovered.  First the oxygen tube came off, then the feeding tube, as he grew strong enough to suck.  First a bottle, then the breast.  Finally it was just the PICC line left (a Peripherally Inserted Central Catheter, aka a Super IV J) for his antibiotics.

Finally one morning we arrived at the NICU to bring him home.  Our wait was over, and I felt our new life together could really begin.  My daughter met him for the first time – what a precious sight!  Those 17 days were over. 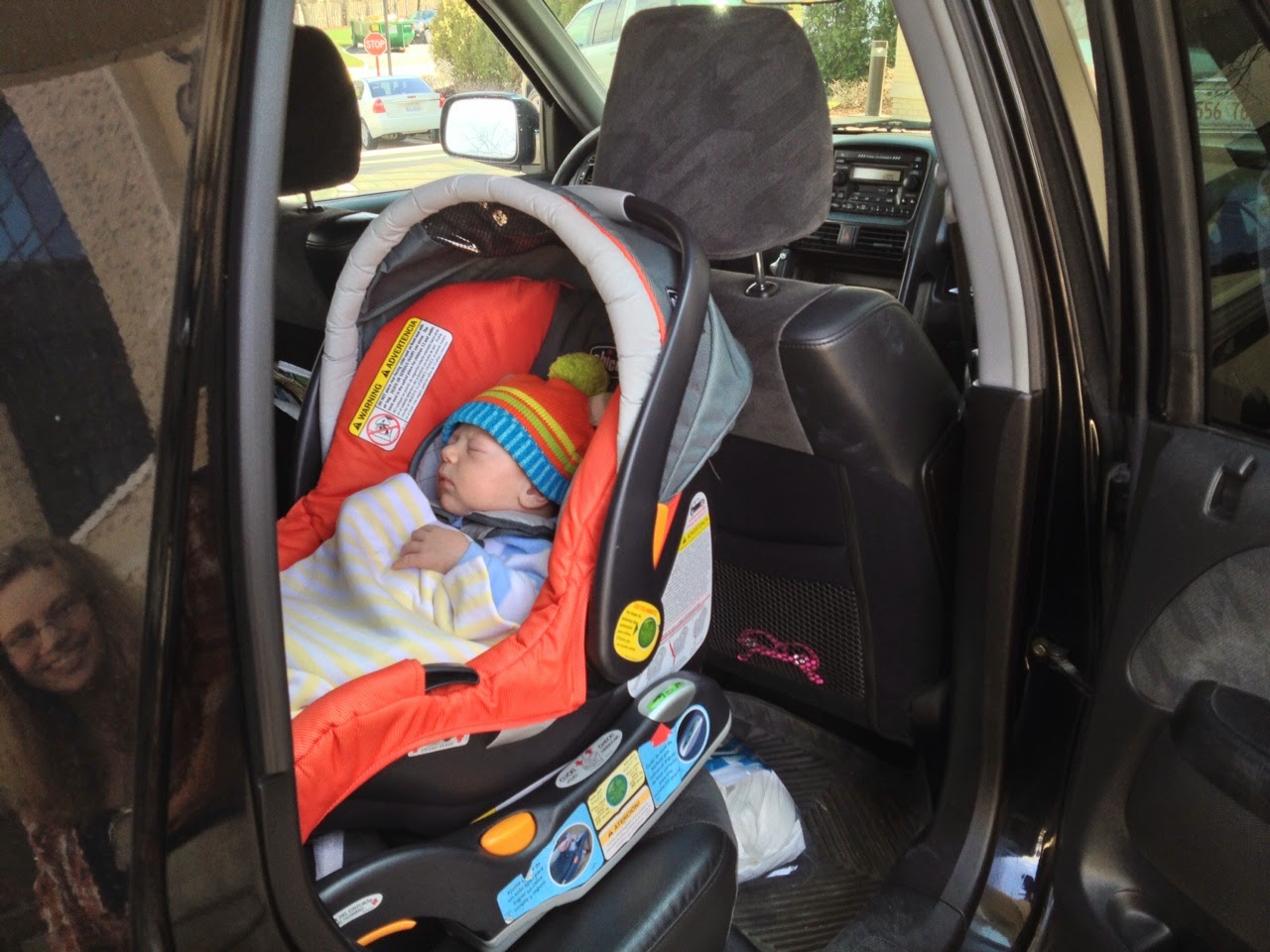 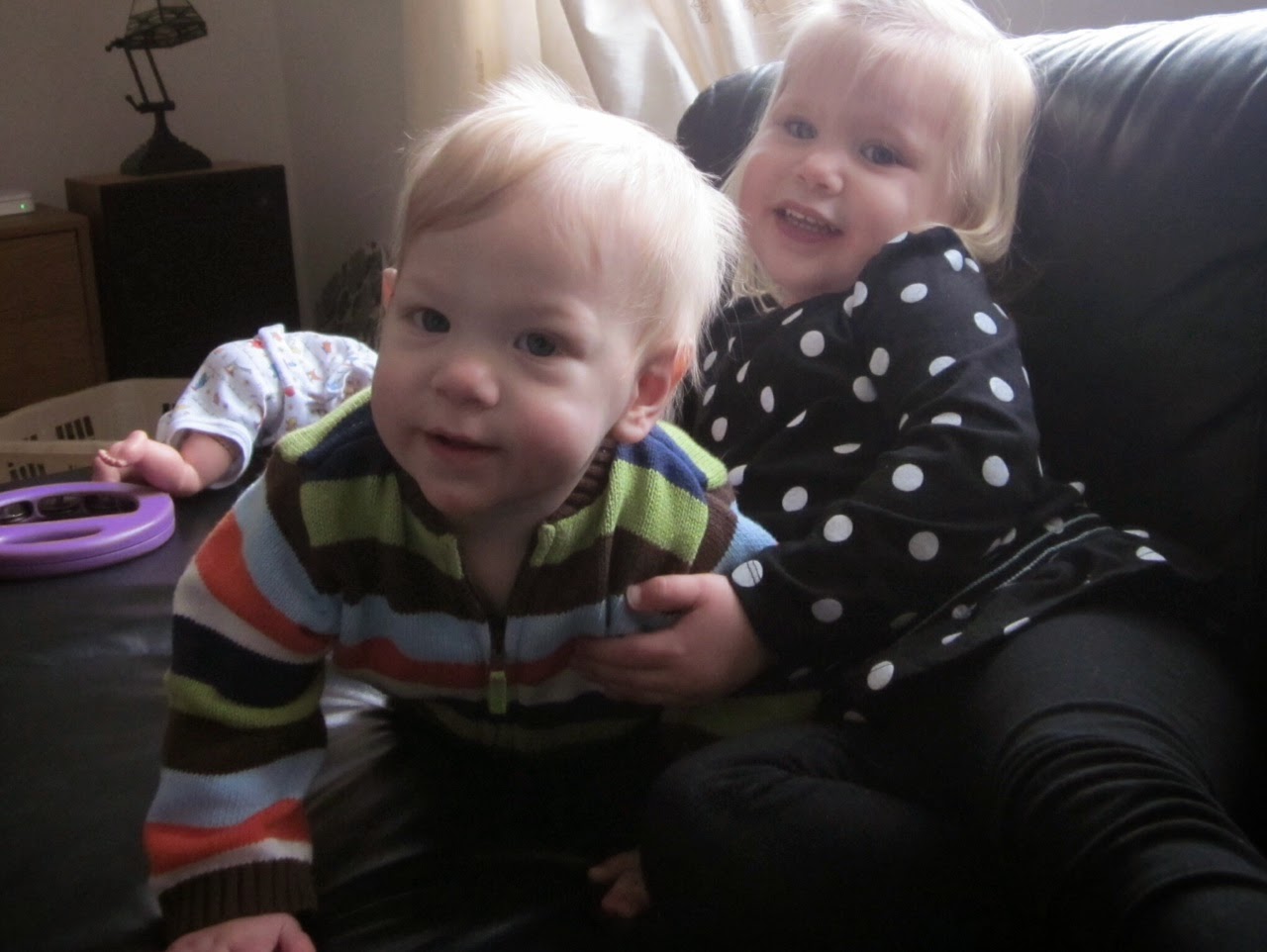 Since then my son Austin has grown big and healthy, with no lingering issues.  Nearly a year later, I am still so grateful.  Grateful for the doctors and nurses who saved the life of my son.  Grateful for the NICU, and grateful our stay was not longer.  Grateful to leave the NICU with my son snuggled safe in his car seat.  I know not every mother gets to do that.  We are grateful that his rough start has not left any lasting damage.

Our time in the NICU has given me a perspective on motherhood that I value.  When I think of how much pain I endured in labor to have that first hour with my son, only to wait instead for three days to hold him --- all I can say is that there is grief, but the gratefulness outweighs it.  Today we have a wonderful relationship, my son and I.  I don’t feel that our bond is diminished by our brief time spent apart.  I love my son.  I am his mother.  Those two things, nothing can change.
Posted by Anna at 4:16 PM