On Becoming the Mama Bear

They say that things have to get worse before they get better. Things definitely got worse, but now they are finally getting better.

I could give you all the details, and tell you about how Johnny just wasn't keeping food down, and about how his belly was becoming distended again.  Or I could tell you about what it was like to see him get an NG tube put in for the second time. Or about the series of X-rays they did over three days to determine that there was bowel obstruction that would require a second surgery. And I could tell you about the surgery it's self.  But I am really tired of talking about medical stuff. The important thing for you to know is that Johnny had to go into surgery again on Sunday to correct a bowel obstruction that resulted from the first surgery. And after that we were back to square one with his recovery.

What I do want to talk about is what it's like to be a mother in the hospital. These last two weeks have been long and draining. Each day is so full and so much happens in 24 hours. I believe that all difficult circumstances yield great fruit.  Some perspective is gained, some skill or virtue or disposition is acquired. Over these two weeks I have learned to become a Mama Bear. The Mama who stands up and fights and roars for her baby. It's not that I haven't fought for Johnny in the past. But trying to be a mother in a hospital setting with a new nurse every 8 hours and a team of doctors coming into your room each morning when you are barely awake requires you to stand up and roar in a different way than you would have to at home.

It's not that I'm fighting doctors and nurses all day.  I have a deep respect for doctors and nurses and we have had some really great ones taking care of Johnny. Each day the docs make a plan, and it's up the nurses and us to carry it out. Depending on the doctor the plan may change. Every nurse has their own style and opinion. But when it comes down to it, I know my baby better than they do, and that's where I stand up for him.  I know that he will sleep better in a bed with me than in a crib by himself. I know that giving him clear liquids in a bottle will just make him mad and gaggy, and he'd be better off just nursing.  I know that, no, he doesn't have a fever, he's just warm when he wakes up from a nap. Or, even though you took his temp 20 minutes ago, he feels warm, can you take it again? And when he had major spit up after getting Tylenol, it's not his GI, it's just the result of him trying to gag up the medicine. I know when it's ok to do vitals when he's sleeping, or when we shouldn't wake him up.  I know if he's crying because he's tired,  or because he's hungry, or in pain. I know my baby, and it was really gratifying to see my mothers' intuition help Johnny be more comfortable and help him make a good recovery.

After the second surgery Johnny had the recovery that was originally expected of him. Sunday and Monday he was pretty uncomfortable and needed strong pain control. Tuesday he began to perk up, he got his NG tube out and we began lessening his morphine. Wednesday I was able to start nursing him. He didn't have much of an appetite and only nursed twice. But he didn't throw up! Thursday he really turned a corner. He was taken off morphine, was eating a little more and finally started pooping. Like, actually pooping. Normal baby pooping.  He even had a blow-out and I got poop on my jeans! It's was like a Christmas miracle!

And today; today was the day they sent us home. That's right, I am writing this post from the comfort of our own home. And it is so good to be home. Johnny is doing great. He's averaging about 10 poopy diapers a day. (The surgeon warned us that he would have very frequent stools for the first few weeks.) It is so good to be nursing my baby again. That separation was really stressful and I will never take being able to nurse him for granted again. It's also super crazy to have him sitting on my lap and feel the rumble of his little toots! We are in a new chapter of life with our brave little boy. And we're hoping that we have put hospital stays behind us.

Thank you, friends, for all your love and prayers and food and friendship. You make life sweet and good when things are kind of rotten. You are all a part of Johnny's life and we will tell him that when he gets bigger. We love you! 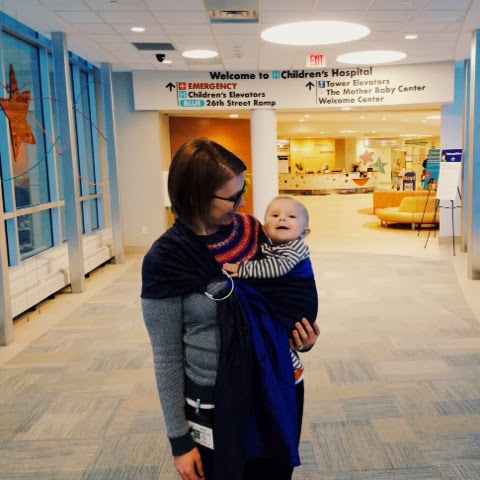