Today I thought instead of writing about all the things that are difficult I would write about all the blessings that have filled our hospital stay so far.

The first is very obvious to me every time I enter the unit we are staying in. "Med/Surg, Hematology, Oncology". Some of the other kiddos on this floor are recovering from surgery like Johnny, but a lot of them have cancer or blood infections. Yes, what we are going through with Johnny is very difficult right now. But it's only difficult right now. For the majority of Johnny's seven months here our life has been very normal. I even forget sometimes that he was born with this. This is not life threatening. I know there are kid here going through chemo. My mom was chatting today with a dad whose four year old son had a brain tumor, then went through radiation, and is now fighting an infection. I know there are families who spend A-LOT of time at the hospital. I know their lives are deeply affected by their children's illnesses, some of which are life threatening. All things considered, what we're going through is not that bad.

Second: We have The Best Support System! Prayer, food, and boosts of morale.
Family, friends, and people who have never even met Johnny are praying for him. He is on the prayer lists at several different churches. Even though Alex and I are stressed and don't like being here, we have a peace that pervades all we do. We have not had to worry about a single meal. We have eaten better here the last five days than we do at home! And all sorts of sweets and treats keep making their way to our room. As well as some fun things for Johnny to play with!

Social media sometimes gets a bad rap for being impersonal and replacing more meaningful communications. But in a situation like this it is a life saver. During all three of our hospital stays with Johnny one of our favorite things to do has been at the end of the day to read to each other all the encouraging comments and messages that people have sent us. We've had so many people come to visit and cheer us up.  And it is such a comfort to know that our family is close by and we can call on them for anything. It's especially nice to have my mom and my sister come hold Johnny so I can shower, or pump. (Grrrr....pumping)

Thirdly, I'm so grateful that Johnny has had some relief from his gas pain with this NG tube. He slept through the night last night. Did you hear that? THROUGH THE NIGHT!! All three of us woke up feeling so refreshed. Johnny had at least an hour of happy awake time in the morning and it was so nice to see him playing with his toys. The day had some ups and downs. We're still just waiting for a really big fart or something to clear out his intestine. Also, due to an incident involving a new IV line, Johnny now hates every nurse and cries every time one of them comes into our room. But Johnny cheered up this evening and gave Alex and I a few big smiles tonight. That was the best part of my day! 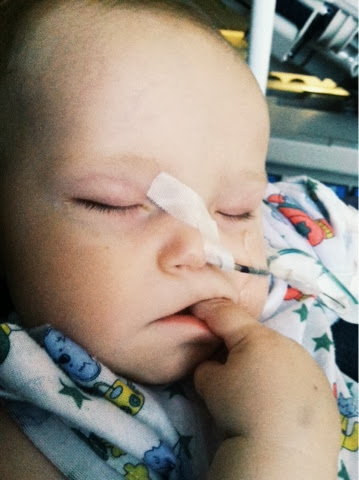 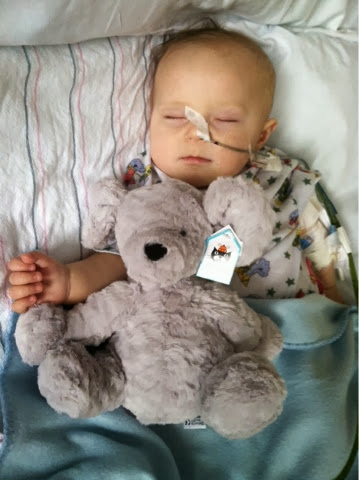 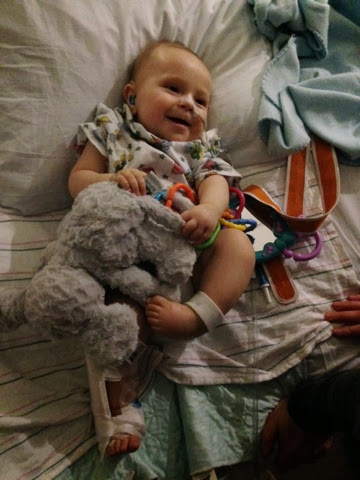