Just a quick update before Johnny and I hop into our hospital bed. (Side note: we got more sleep last night than the three previous nights combined. We did end up giving Johnny a dose of morphine because he was so uncomfortable, so I'm sure that contributed to his sleep. But I'd like to think the co-sleeping helped too!)

Johnny remained very uncomfortable for most of today. Although he was passing some gas his belly just wasn't going down in size. It was very hard to watch him try to get comfortable with no success and then finally just fall asleep with his eyebrows furrowed and the corners of his mouth turned down. They resumed the NPO order (nothing by mouth) which was fine because I don't think he had any desire to nurse.

People keep asking me why his intestine is backed up even though he had his great big first poop, so I'll explain a little more. When they closed the ostomy they actually cut part of the intestine out (the part that was sticking out for his stoma) to have a fresh cut to sew together. That's a lot of trauma for the intestine to go through so it shut down. Since Johnny has been NPO basically since Thursday his stomach has also shut down a little.  We think the stool he initially passed was what was already in his system before surgery. And hindsight being 20/20, we now realize that we gave him too much breast milk too soon. His stomach was not ready for it, so it triggered a cycle of vomiting and backing up. Long story long, he's full of gas and can't work it out.

Today he ended up getting an NG tube. This is a small tube that goes down his nose into his stomach. Sometimes they're used for feeding. In this case it is used to suction out the stomach.  I was initially not excited about another thing hooked up to Johnny, and he really did not like having it put in, but I'm glad we did it. As soon as the tube reached his stomach green bile started spraying out- even before they had finished hooking everything up! In the first 20 minutes about 200 ml had been collected! I thought about taking a picture to post, but then decided to spare you. His comfort level improved to quickly. He slept very soundly for a while. And then he was awake and interested in playing with toys for a little bit, that hasn't happened since before surgery!

I'm hoping this is a turning point and that we begin to see some progress. It has been a long four days so far and we're ready to have things go well! 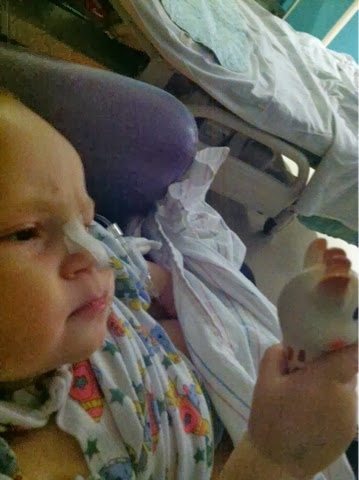 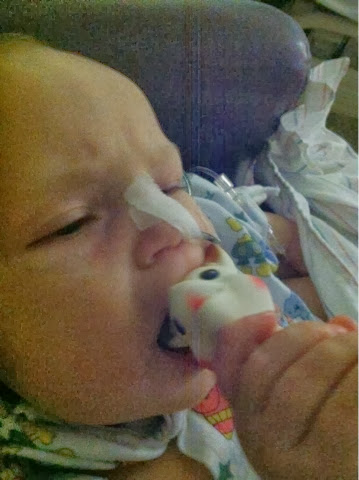