Today was a rough day. Johnny has been pretty uncomfortable most of the day and had a few episodes of more intense pain. The name of the game today was pain management. He's been on regular pain meds and we've needed to give him morphine a couple of times. He's also been running a low grade fever all day. That's normal post-op, if it continues tomorrow that may be of concern, or if it gets above 101 degrees. They are closely monitoring the sight of the closure because there is a risk of infection there. He's receiving antibiotics.

The hardest part about this is that Johnny can't nurse. Even though he's receiving IV fluids I'm sure he's still feeling  a little hungry. But more than that, that's his greatest source of comfort. It's like someone took away his blanket, but it's still in the room and they won't give it back. He's had a pacifier in his mouth the entire day, a real first. This boy never takes a pacifier. It breaks my hart because I know nursing would soothe him so much.

We've been smelling some toots that don't belong to either Alex or me! Alex actually heard him toots once too! And just this evening our nurse said she could finally hear some little bubbles in his bowel. If this continues they said we can start feeding him again tomorrow!

In the meantime we are trying to give him as much comfort as possible. We've just been holding him all day, taking turns rocking him in the rocking chair. He's mostly been dozing, but he's had a few wakeful moments where he's been interested in toys, or in trying to pull the IV out of his foot. But when he falls asleep he holds onto our hands and won't let go.

It's been frustrating to see Johnny this uncomfortable. After his last surgery he was basically back to normal after 24 hours. But we were told that this procedure would have a slower recovery and that Johnny would have a harder time post-op. All the nurses have said that he seems normal. But it's still hard to watch and hard not to worry that he won't feel better.

Prayer requests tonight:
-First that Johnny would not be in pain and be able to get some good rest.

-That Alex and I would be able to get some sleep too! (We got about 5 hours last night)

-That Johnny's fever would go away

That he would not developed an infection

-That he can start nursing tomorrow

-And that he poops real soon!!! 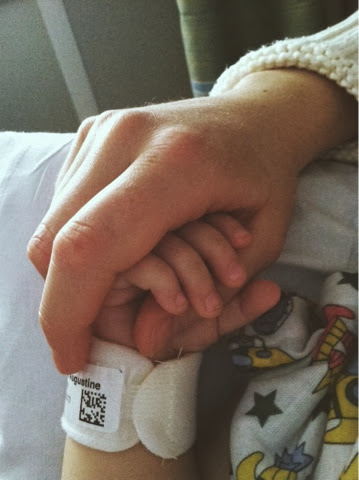