I realize that I need to tie up some loose ends from Johnny's birth story and bring you up to speed with where we're at now.

Since our stay in the NICU we have had several follow-ups, and we have had follow-ups from those follow-ups.  And we will have a few more follow-ups before Johnny turns 1.  And I imagine there will be more follow-ups after that.  It feels like we will be following up on things for the rest of our lives, and I wish we could just be done and settled.  But I am thankful that so far all these follow-ups have given good results.

Of all the defects associated with VACTERL Syndrome the three they were checking out Johnny for were his heart, kidneys, and spine.  He had an ECHO done in the NICU that came back normal. And that was such a relief.  A kidney ultrasound showed that he has a "horseshoe kidney", which means his kidneys are connected along the bottom.  Kidney function appeared to be normal, but they would follow up with another ultrasound when he's a little older. The x-ray that showed some abnormalities in his spine was inconclusive.  The thing they were worried about was a tethered spine, which means that instead of hanging free in the body the spine is attached to something, which if untreated could lead to paralysis, but if caught early could be corrected with surgery. They would follow up on that with an MRI when Johnny was 3 months old.

Then finally, Johnny failed the infant hearing test, and a more advanced test showed he has a mild to moderate hearing loss. Hearing loss is associated with VACTERL Syndrome, so it was not a total surprise. He can hear, but if he doesn't get hearing aids he would be missing quite a bit and could develop some speech impediments. So we would also be following up with an audiologist to get him fitted for hearing aids.  It was sad to think that Johnny will have to wear hearing aids for the rest of his life.  It's just another thing to make him different from all the other kids. But after everything else we were dealing with hearing aids seemed like small potatoes.

The second kindney ultrasound was good, no blockage visible, but they wanted to follow up with another ultrasound in 3 months.

The MRI also went well and no tethered spine was detected.  However he does have some curvature in his spine, and they noticed some abnormal curvature in the aorta of his heart. So we would be following up with an orthopedic surgeon and a cardiologist.


The "orthopod" (as some call them), said that Johnny just is too small right now to be able to tell if the curvature in his spine will need any intervention.  So we will be following up at 6 months and 1 year of age.

The cardiologist had a lot of information for us, and I am very bad explaining it, but what it comes down to is Johnny heart is working fine and will not need surgery. There are a couple of mis-formed arteries, but they work.  And of course, he wants to follow up with another ECHO in a few month.

And so we just keep adding things to our calender and keep thanking the Lord that nothing they have seen so far has been serious.  After getting the green light from all these specialists we were finally able to schedule Johnny's next surgery! And it's soon! October 28.  What a strange phone call that was, "Hi, I'd like to schedule a surgery for my son John."  Not something most parents have to do.  We are a little nervous, and sad that our baby boy has to go through this. But we are so happy to think that we might be done with surgery by the new year! 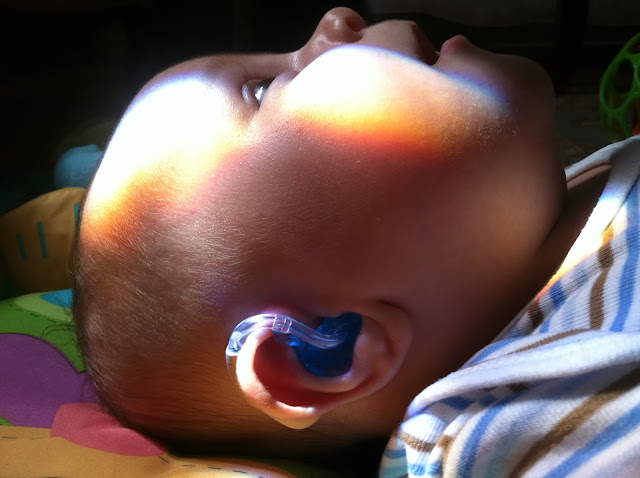