Our room was so quiet and calm.  It didn't even seem like the same room I had delivered in.  We spent most of that first day just resting and trying to get nursing established.  Johnny was not latching on; a lactation specialist visited us several times to work on it, but his little jaw was just clenched shut.  Because he hadn't eaten much his blood sugar was low and they wanted to give him some formula.  I was reluctant to give him a bottle until breastfeeding was well established, but I did want him to get some calories, so we finger-fed him some formula. He took a little, but mostly was just sleepy. Family and some friends came to see us and we proudly showed off our calm little baby who would let anyone hold him.

We were given a sheet to document all of Johnny's activity the first couple of days; feedings and wet and dirty diapers. There were many feeding attempts recorded, and we had seen several wet diapers. That first night Johnny woke up crying twice, at 1:00 am and 4:00 am, and each time I was able to nurse him.  But those were the only successful attempts I had.  And we were still waiting for his first stool. At some point Alex saw a streak of poop in his diaper, but the nurse said that was not enough to count.

All of Friday Johnny slept.  We woke him to try to feed him, but he wasn't taking anything.  All the nurses assured us that some newborns are just very sleepy the first day or two.  I had never had a baby before, so I had nothing to compare him to and wasn't very concerned. But my mom, who had spent most of the day with us, was starting to worry. I later found out that when she went back to my dad's office that afternoon she broke down crying, saying "something's not right, I just know something's not right. He should be waking up to eat!"

We learned how to give Johnny a bath.  When the nurse was showing us how to clean his....you know, boy parts, she noticed a little poop under his foreskin.  She suggested that perhaps there had been meconium present and birth, and it had gotten stuck under there, but because the delivery had been so chaotic and bloody everyone just missed it.  She cleaned him off and we didn't think anymore about it.  But then a few hours later Alex noticed another poop streak in his diaper, and this time he realized it was in the front.  A new nurse was on duty and we showed her the diaper, she took a look at Johnny and there was more meconium under his foreskin.  She thought this definitely was not normal and that he was beginning to look rather jaundiced, so she had the N.P.on the floor take a look at him.

All this time I had a mounting sense of worry, but it wasn't until they wheeled him away in his little bassinet that it hit with over whelming intensity; there was something wrong with our baby. Alex and I followed behind to the special care unit.  I had hardly been on my feet at all since the epidural wore off, and my legs were weak and unsteady.  One of the nurses told me that I might want to just wait in our room, that they would be throwing around a lot of medical jargon and that it might be confusing.  That didn't matter, I wanted to stay with our baby. I was trying to hold it together, but seeing my little baby, naked, under the bright lights, being poked and prodded by the N.P. and the Resident on duty was too much.  They said he was jaundiced, lethargic, his belly was distended, and there was an absence of bowel sounds.  The N.P. said she was going to probe his rectum to try to get some bowel activity going, but every time she tried she met with resistance.  After turning him and carefully examining his little bottom she discovered that there was no rectal opening. She looked at the Resident and said "fistula?"

I didn't get to find out what a fistula was until later. At that moment they started making phone calls to transfer Johnny to Children's Hospital.  And they called my Dr. to see if I could be discharged early to go with him.  I had not showered since Tuesday (and it was now Friday) so I decided the best thing for me to do was to get cleaned up and ready to leave.  Alex called my parents to come down and wait with me while he stayed with Johnny.  I stumbled back to our room half blinded by the tears that I could no longer control, and carefully got into the shower, hoping my weak legs wouldn't give out on me.  The hot water felt good, but it felt better to be alone and give into to the heaving sobs I had been suppressing.  There in the shower I allowed myself to be mad and to feel doubt.  Why was God letting us go through this? Hadn't we been through enough already? I thought of Scripture telling us that we will not be given more than we can handle and that "suffering produces perseverance; perseverance, character; and character, hope." But I was tired of suffering, tired of being tested, tired from over two years or persevering, and I was running out of hope.  And yet, in a tiny quiet part of me, I knew that I was going to get through this.  I had no idea how, but I knew that I would.

I got out of the shower, somewhat calmer, and began to pack up my things. My parents were there now to help me, and Alex came back to our room to give an update. Johnny had an inperferate anus, that means there is no anal opening.  He also had a fistula, or a connection, between his colon and urethra.  He was unable to pass stool through his bowel and so he was completely backed up and his body had been trying to pass stool with his urine. Alex's dad is a pediatrician, and told Alex over the phone that Johnny's situation was not life threatening, and that as far as birth defects go it is pretty easy to deal with, he would need surgery to correct  his anus and intestine and to close off the fistula. It was reassuring to hear this, but I still had no idea what was going on.  They were loading him into a transfer unit to take him to Children's.  I suddenly realized I had not given him a kiss before I left the special care unit. I told Alex that I wanted to kiss him before he left. So Alex went to figure that out. In the meantime my mom and the Resident were trying to get me to pump so that my milk would come in.  I remembering being so annoyed with them and being so incredibly distracted that I didn't care if my milk came in or not.  But I did sit down and pump a little. 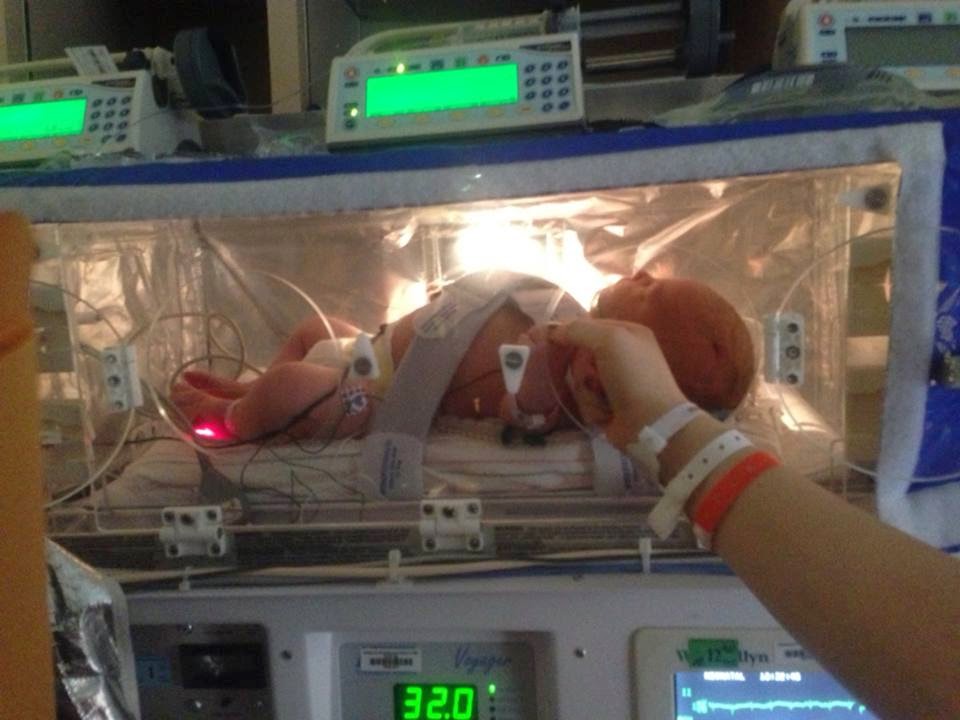 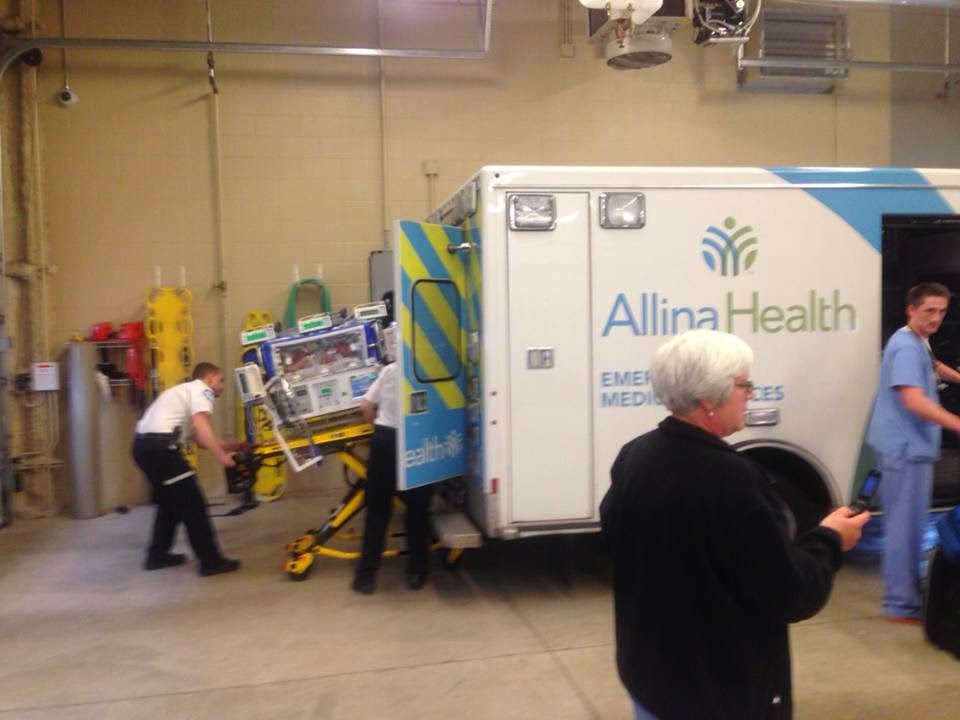 Alex rode with Johnny in the ambulance, I stayed behind to wait for my discharge.  My sister joined us at the hospital.  She had been on her way to have dinner with some friends when she got a call from my mom that something was wrong with Johnny.  She sat in her car, in the parking lot, crying and feeling like she couldn't enjoy an evening with her friends while we were going through such a crisis, so she came to lend support.  I don't know what we would have done without our family and friends who came around us and held us up during that incredibly difficult time.

When I was finally all discharged I was wheeled out of St. Joseph's Hospital and my mom drove me the 5 blocks over to Children's Hospital.  All I wanted was to be with my baby and my husband.  When we got to the NICU they had Johnny set up in an incubator.  The rounding Resident came by and told us the tentative plan for Johnny.  I didn't hear anything she said.  I was completely crushed, feeling like I had entered a long dark tunnel and I could see no end.  When the doctors left Johnny's nurse, a very sweet Philippino lady, asked me if I wanted to hold him.  I didn't even know that was possible! She brought a recliner into our room and I took off my shirt and put a hospital gown on.  She took Johnny out of the incubator, carefully trailing a handful of leads, wires and tubes, and I got to hold my baby to my chest.  "This is how it should be," I thought, "this is all we should be doing."  But reality was unkind and we would have to wait a while for things to be as they should.  I told Alex that evening that when we got Johnny home I was never going to put him down. 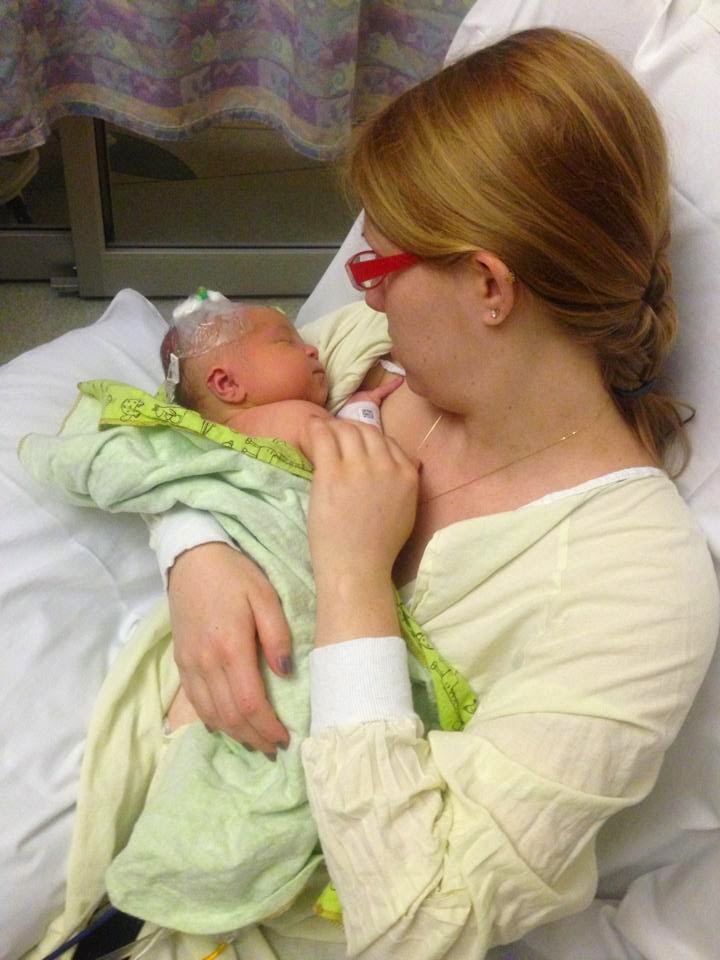 It was about 10:00 pm and we still hadn't had dinner, so reluctantly I let our nurse put Johnny back.  I did a little more pumping (and once again was annoyed that people kept suggesting I do so), and we joined my parents in the family lounge for some Jimmy Johns.  I had been avoiding cold cuts throughout my pregnancy and Jimmy John's was one of the things I was most looking forward to eating again, but after forcing down a couple of bites my appetite was gone.

We decided that I would spend the night at my parents to try to get some rest and Alex would stay on the fold out couch in Johnny's NICU room.  My mom and I made a quick stop at my house to pick up some clothes and my breast pump.  I hadn't realized until then how badly I was neglecting my own postpartum body.  We were walking up my front steps when my left leg gave out and I was down on my hands and knees. I couldn't even get up on my own and I couldn't climb stairs.  Our natural childbirth classes recommended that mothers spend the first week after baby is born in bed, getting up only to use the bathroom and soak in the tub.  That was not an option for me. It was now 1:00 am on Saturday. We got my things, went to my parents house. I pumped, ate a banana, and then cried myself to sleep.