When I heard it was time to push I had a great desire to brush my teeth and wash my face. Alex helped me with this as I was bed-bound. I think I wanted to look nice for any pictures that may be taken when the baby was born.  Little did I know that I would not be very photogenic after what I was about to go through. But at least after brushing my teeth I felt awake, refreshed, and ready to work again.

A note on epidurals: Do what you need to do.  If you really can't manage the pain, get one.  If you've been in labor for 2 complete days, get one. But if you can, try to avoid them.  I'm grateful that I had relief from pain and a chance to regain some strength through rest, but having an epidural made pushing difficult and completely limited my positions to the classic on-your-back-knees-bent.

So there I was, on my back, slightly propped up, Alex holding one leg up, the nurse holding the other (because remember, I can't even move my legs by myself, much less hold them up).  As I mentioned before, I still had some sensation. I could tell when a contraction was coming and when I needed to push. And with the help of our nurse I knew where I needed to push, but my pushing was not effective. I think it was because I couldn't feel the pain and didn't have that sense of urgency.  I asked to be propped up more, sitting in a C-shape, hoping that gravity could play a bigger role in helping baby out. It didn't help much though, and because I was sitting up the pain medication was sinking lower into my body, causing me to feel everything in my back.

One hour of pushing went by, then a second, then a third. Alex and the nurse holding my legs up. Me holding on under my knees, pulling myself up into a C shape, holding my breath, pushing, breathing again and letting go.  Over and over and over. At some point a second nurse came in and they set up a bar over my bed and folded a sheet over the top. I put my feet on the sides of the bar and held onto the sheet, pulling myself up with each contraction. My arms were beginning to weaken, so Alex pushed me up from behind. We were both working so hard. It was a team effort, and there's no way I could have made it with out him.

I didn't realize how much time had passed.  At 7:00 in the morning the nurses decided to call my doctor. She came down and after observing a couple of pushes said that "we can try  vacuum removal, otherwise I have the OB specialist on call for a C-section".  I definitely didn't want a C-section, so I said to try the vacuum. After that everything happened very quickly. All the lights went on, big spot lights and other machines were pulled out of cabinets.  My doctor donned a white coat and gloves. Two thoughts kept running through my mind; one was that I wanted to get our baby out, the other was wondering why my body was failing to do what it was supposed to do.  A suction disc was inserted into the birth canal and attached to our baby's head. Each time I pushed my doctor pulled. I couldn't see, (thankfully) but Alex could. He said it looked like a cylinder of purple harry flesh coming out, and when the doctor stopped pulling it shifted back into a head shape. Later he told me all he could think was "what are they doing to our baby?" I don't know how many pushes we did this way, but on what ended up being the last one my doctor sounded frantic, she told me to keep pushing, don't stop, keep pushing. so I did. And it was the hardest thing I have ever done. I used every ounce of my strength to get him out and I don't think I could have done another push. 7:57 am, on Thursday May 30th, after 54 hours of labor, our son, John Augustine, entered the world.

Alex said he looked kind of blue and was worried because he didn't cry right away. But as certain as the sunrise, he began to cry and kick.  They put him on my chest and all the pain of the last two and a half years of trying for him, seeing everyone around us get pregnant, negative pregnancy test after negative pregnancy test, all that pain was washed away with joyful and healing tears. I was holding our baby, and he was alive and breathing and beautiful. It was the most triumphant moment of my life. 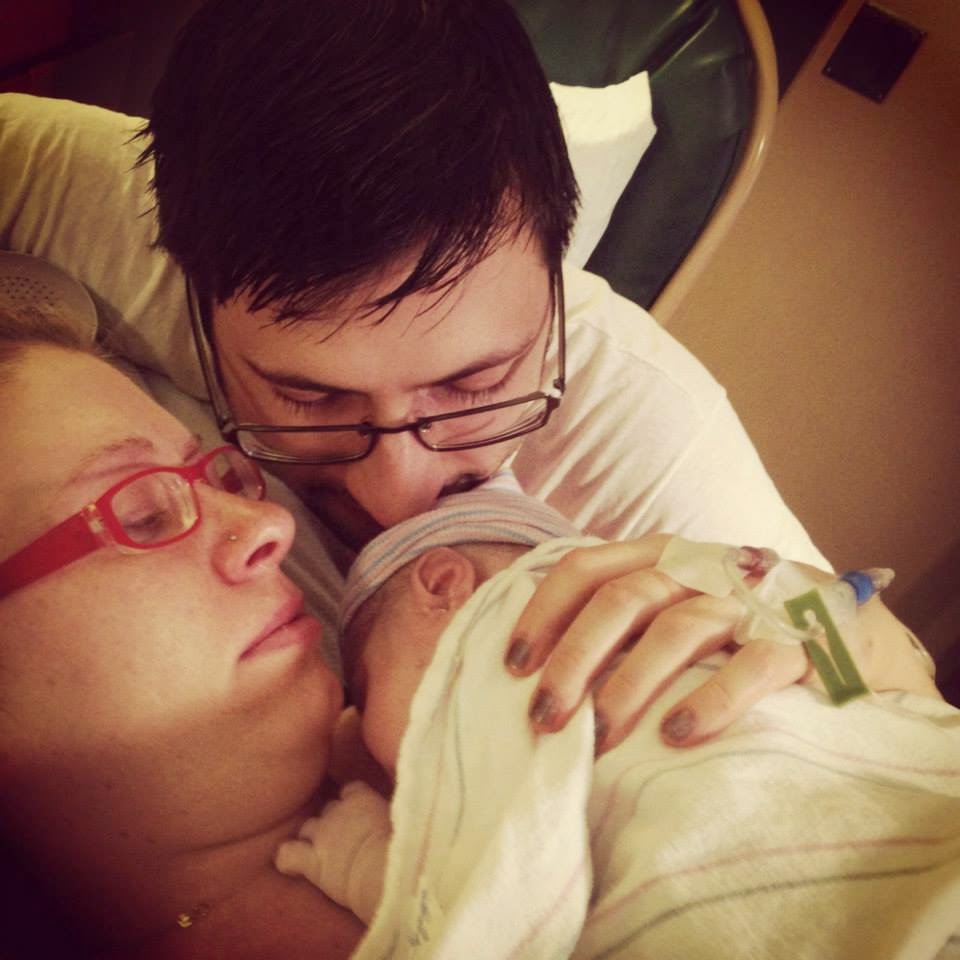 But I was not allowed to have rest yet.  After my final push to get Johnny out my uterus stopped contracting. After 3 days of constantly working, that muscle had shut down, and as a result my placenta was not delivering.  So they had to manually extract it. And yes, it felt as bad --no, worse!-- than it sounds.  They handed Johnny over to Alex, who was thrilled to have some skin-to-skin time with our new little baby, but was crushed to see me in so much pain.  I couldn't feel anything in the birth canal (like the tearing that was a second degree laceration, or the two pints of blood that I was losing) but I could feel EVERYTHING in my abdomen. And getting that placenta out hurt, a lot. There were many tears. But finally it was over and the three of us could rest as a family.

I realize I haven't given Johnny's birth stats. 9 lbs 7 oz and 21 inches long.  He was huge! And was born with chunky thighs and chubby cheeks. We spent the rest of that day admiring him and napping with him. He was so peaceful and quiet and slept a lot.  He hadn't shown much interested in eating that first day and I had had only a couple successful breastfeeding attempts.  Everyone said it was normal for new babies to be really sleepy to first day or two, so I wasn't worried.  I was actually feeling like we had gotten lucky and he was just an easy baby. It wasn't until the next day that we began to think something was wrong. 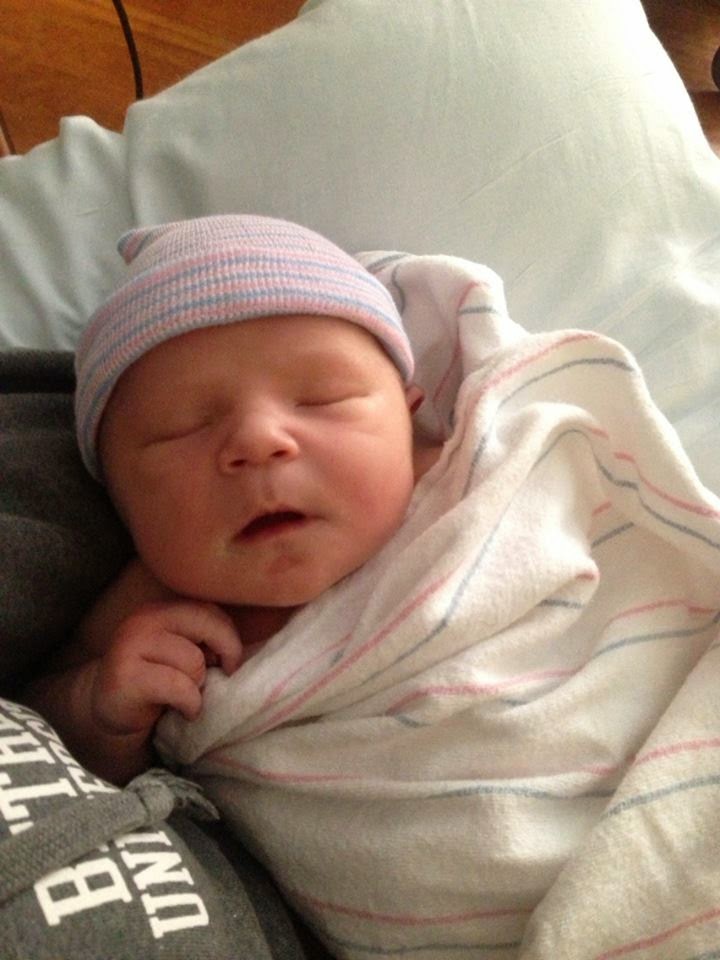 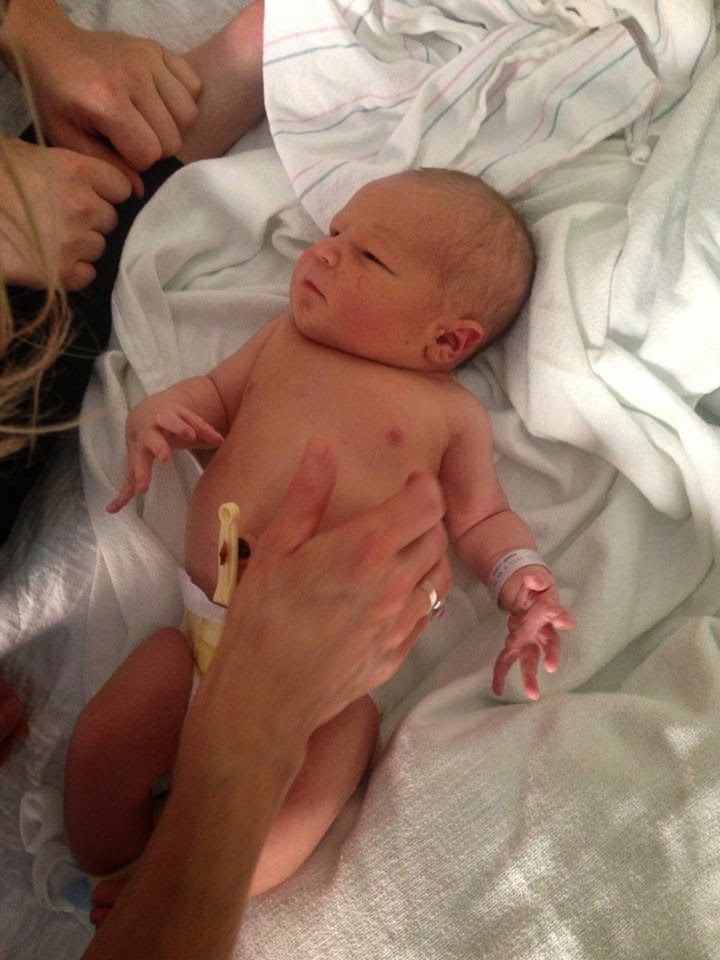